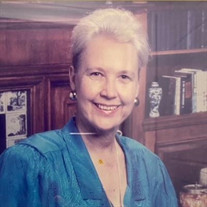 Wilma “Kathleen” Kasper Ruddick March 6, 1931 - March 5, 2021 On the eve of her 90th birthday our beloved mother, Kathleen Ruddick, left her earthly home and flew with the angels to her eternal life in Heaven. A longtime resident of Seabrook, Texas, she leaves behind a legacy of love and service to her children, grandchildren, great grandchildren and many friends and relatives. Born to Edwin N. Kasper and Myrtis Borden Kasper at their home in Houston, Kathleen was the youngest of three siblings. Her older brother, Edwin “Meo” Kasper, Jr., and older sister, Betty Jane Sieck, preceded their “Baby Sister” in death. Kathleen attended Stephen F. Austin High School, where she was an honor student and lieutenant colonel of the Scottish Brigade drill team. After graduation, she married her high school sweetheart, Melbourne Jack Martin, Jr., and together they had 4 children. Although later divorced, Jack and Kathleen remained close and she helped him take an active, positive role in their children’s lives for which they are eternally grateful. Kathleen developed many talents and abilities to support her young family, including floral design and secretarial skills. She worked as a secretary at Schlumberger Limited and for many years was an executive secretary for Dr. George P. Noon, a renowned cardiologist at Baylor College of Medicine. While working at Schlumberger, Kathleen met her second husband, Charles K. Ruddick, whom she married in 1967, gaining 2 stepsons and a stepdaughter with whom she had close, loving relationships. Kathleen had many interests and especially enjoyed travelling. In her lifetime, she visited many of the world’s most beautiful places with friends and family. She made friends everywhere she went. Kathleen was a faithful member and supporter of Bluff Springs United Methodist Church in Canton, Missouri, near the second home she and Charlie purchased in his hometown, Keokuk, Iowa, in 1975. She enjoyed her home and garden in Keokuk and loved the time spent every year with her best friend, Dorothy Higbee, and the other great friends she made there. Kathleen cared lovingly for Charlie through his seven-year struggle with Alzheimer’s until his death in 1996. Some time later, she reconnected with Ben Ryland, a friend of both Charlie and Kathleen from their Schlumberger days, and he became her cherished companion. Ben and his “Kakalina” enjoyed traveling the world together until his passing in 2008. Afterwards, Kathleen continued to live independently, travelling between Texas and Keokuk, remaining close to friends and her extended family. Kathleen faced the challenges in her life with fiery determination and a “can-do" attitude that was an inspiration to all. She was a warm, gracious, joyful and loving influence in every life she touched. Kathleen is survived by her three sons, Stephen “Craig” Martin (Susan), Gary Leigh Martin (Bethann), Melbourne “Jack” Martin, III, (Liza), and her daughter, Marla Dean Martin Garcia (Gene), as well as 8 grandchildren, 3 great-grandchildren, her stepchildren, Barbara Archer and Bob Ruddick (Gery), 4 step-grandchildren, and 4 step-great grandchildren. Kathleen’s children are grateful to Bertha Mata, Alice Morehouse and Dennis Jenkins for the care they provided to help Kathleen maintain her cherished independence in her later years. They also appreciate the tremendous help Bob Ruddick, Charlie’s older son, gave with her financial affairs. Finally, they wish to thank Gene Garcia, Marla’s husband, for always being there to take care of Kathleen’s needs while in Seabrook. No woman ever had a finer son-in-law. In lieu of flowers, Kathleen’s children ask that you consider a donation in her honor to the Bluff Springs United Methodist Church, US-61, Canton, MO 63435 where Kathleen received spiritual nourishment for over 40 years. The funeral celebrating Kathleen’s life will be held at South Park Funeral Home, 1310 North Main Street located in Pearland on Friday, March 19, 2021. Visitation will commence at 1 p.m. with the funeral service to begin at 2 p.m. To access LIVESTREAM, please click link below: http://webcast.funeralvue.com/events/viewer/50032

Wilma &#8220;Kathleen&#8221; Kasper Ruddick March 6, 1931 - March 5, 2021 On the eve of her 90th birthday our beloved mother, Kathleen Ruddick, left her earthly home and flew with the angels to her eternal life in Heaven. A longtime resident... View Obituary & Service Information

The family of Kathleen K. Ruddick created this Life Tributes page to make it easy to share your memories.

Send flowers to the Ruddick family.