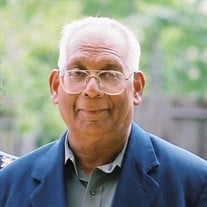 K. Thomas Verghese, 89, went to be with the Lord on Wednesday, October 7, 2020 after a long battle with Parkinson’s disease. He passed peacefully in his home, surrounded by family and friends. Thomas was born on June 13, 1931, the son of the late of K.G. Thomas and Mariamma Thomas, Kuzhivelikavunkal, Theodical in Kerala, India. He was the eldest of their seven children. He married Mariamma Mathew, daughter of P.E. Mathai and Saramma Mathai, Kuzhikalayil House, Pariyaram, Mallapally, Kerala, India, on June 12, 1961, at the age of 30. Their first son, Ashok Thomas, was born in October of 1962, and second son, Prakash Mathew, was born in February of 1965. Thomas joined the Indian Army in 1953, serving as a General Duty Clerk in many places across north India. He then joined the Seaman’s Office of the Indian Merchant Navy in Bombay. In November of 1972, he and his two sons joined his wife in Galveston, Texas where she was working as a nurse. Over the next few years the family moved from Galveston to Dallas, finally settling in Pasadena, Texas, where Thomas worked at a company that manufactured drill bits for the oil industry until his retirement. Thomas was among the founding families who helped establish the St. Gregorios Orthodox Church in Houston, Texas, and remained a member there until his passing. He loved animals, and advocated for them in whatever ways he could. He loved his daily morning walks that took him around a local pond, and had great appreciation for nature and its beauty. Thomas was preceded in death by his wife of 56 years, Mariamma Verghese, and two brothers, K.T. John and T.K. Thomas. He is survived by son Ashok Thomas and his wife Jenny, son Prakash Mathew and his wife Leslie, his grandchildren, Nathan George, Nicholas Mathew, and Andrew Thomas, brother M.N. Thomas, sisters Mariamma Philip, Saramma Chacko, and Susan James, along with numerous family members and friends. In lieu of flowers, the family requests that donations be made to either the Pasadena Animal Shelter,, 5150 Burke Road, Pasadena, TX 77504 or St. Gregorios Orthodox Church, 13218 Player St., Houston, TX 77045.

K. Thomas Verghese, 89, went to be with the Lord on Wednesday, October 7, 2020 after a long battle with Parkinson&#8217;s disease. He passed peacefully in his home, surrounded by family and friends. Thomas was born on June 13, 1931, the son... View Obituary & Service Information

The family of K.T. Verghese created this Life Tributes page to make it easy to share your memories.

Send flowers to the Verghese family.