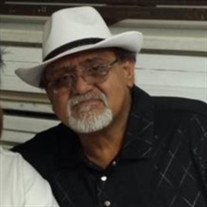 Juan Castillo Jr., 66 of Houston Texas, was born September 12, 1955, in Brownsville, Texas. Juan was peacefully called to be with his Lord and Savior the afternoon of Friday, March 25th, 2022, with loved ones by his side. Juan was a devoted and loving husband to his wife Ermelinda for 31 years. Juan was a huge family man and endearing friend. All would agree that he came off as a big old bear but was a true softie at heart. Everyone knew to ask Juan before asking Ermelinda (Mom) because he would help in any way that he could, even if it meant he was going without. His love for truck driving, spanning over 48 years, ranged from concrete work at Pioneer and Southern Star to one of his favorite trucking jobs, delivering for Bimbo bread. He would always get breads and share them with friends and family. He even participated in Truck Rodeo’s giving his peers a run for their money. Juan loved jumping in his own truck to take his wife on a cruise down to the beach and grabbing an ice cream or stopping by one of his favorite spots to pick up his lotto tickets. Juan also enjoyed going fishing with his son’s, showing them where his best fishing spots were and how to catch the biggest fish. He even started melting his own fishing weights and sharing them with friends and family. Juan and his best friend Felipe Garza would spend days on days going to get a couple of tacos or coffee and sit for hours talking and even pull others into the conversation, as he was so big hearted he could make friends with anyone. Juan is preceded in death by father Juan Castillo Sr., mother Zenaida Reyes, siblings Anita Nunez and Alfredo “Freddy” Castillo. He is survived by his beloved wife Ermelinda Castillo, son’s Ruben “Alex” Castillo and wife Janice, Johnny Castillo, Anthony Castillo, Victor Galvan and wife Staci, daughter’s Yolanda Castillo, Tracy Rivera and husband Ben, Maria Camacho and husband Hugo, Veronica Martin and husband Scott, and Esther Galvan. He is also survived by his 5 siblings, 11 grandchildren and so many loving cousins, nieces, nephews, and dear friends. Join the family for the visitation and rosary online via live stream: http://webcast.funeralvue.com/events/viewer/72163/hash:AE671F81D90D965A

Juan Castillo Jr., 66 of Houston Texas, was born September 12, 1955, in Brownsville, Texas. Juan was peacefully called to be with his Lord and Savior the afternoon of Friday, March 25th, 2022, with loved ones by his side. Juan was a devoted... View Obituary & Service Information

The family of Juan Castillo Jr. created this Life Tributes page to make it easy to share your memories.

Send flowers to the Castillo family.