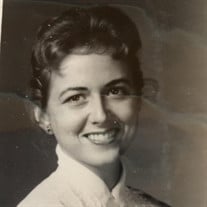 Adams, Jerry Jo (Scarborough) entered the loving arms of Our Lord on Easter Sunday April 4, 2021 at the age of 84. She was born in Houston, Texas to Raymond Lewis Scarborough and Geraldine (Jerry) Varner Scarborough on November 20, 1936. She graduated from Stephen F. Austin High School in Houston where she excelled as a twirler, Drum Major, and competitive synchronized swimmer. In 1958, she graduated from Sam Houston State University, formerly Sam Houston State Teachers college with a Bachelor of Science degree in Education with minors in Fine Arts, English, and Social Studies. While at SHSU she was president of her Alpha Delta Pi Sorority, served on Student Government and was chosen as Miss Sam Houston, as well as participated in numerous other campus organizations. She spent many years as an educator in both Houston and Huntsville, Texas teaching Pre-Kindergarten and Second Grade. Her last ten years of teaching prior to her retirement was with the Windham Independent School District, a division within the Texas Department of Corrections as a correctional educator in Adult Education. She was a Sunday School teacher and coordinator of Vacation Bible School in Bryan, Texas. Served as Vice President of the PTA in Huntsville, Texas, was Secretary of the Huntsville Study Club, fund raiser for the Junior Service League, and was a committee member in the Houston Livestock Show and Rodeo. Jerry Jo was preceded in death by her parents Raymond and Jerry Scarborough and her two younger brothers Raymond Scarborough, Jr. and Tommy Scarborough. The thing that meant the most and brought Jerry Jo the most joy was the love she had for her family. She leaves to cherish her memories and is survived by; daughter Sherry Adams, and sons Mark (Amy) Adams and Brian Adams. Three grandchildren Alexis (Josh) Dotzler, Jake Adams, and Ireland Sutton, and three great grandchildren Colton, Hunter, and Tenley along with many other relatives and friends. The Adams family will be receiving friends and family on Saturday, April 10, 2021 with visitation at 1:00 pm, at South Park Funeral Home, Pearland, Texas. The Funeral service will begin at 2:00 pm for anyone that would like to join the family. For those unable to attend the funeral service, the funeral service will be LIVESTREAM via the obituary online. To access livestream for the service, please click link below: http://webcast.funeralvue.com/events/viewer/51773/hash:2A4C761E69437E76

Adams, Jerry Jo (Scarborough) entered the loving arms of Our Lord on Easter Sunday April 4, 2021 at the age of 84. She was born in Houston, Texas to Raymond Lewis Scarborough and Geraldine (Jerry) Varner Scarborough on November 20, 1936. She... View Obituary & Service Information

The family of Jerry Jo Adams created this Life Tributes page to make it easy to share your memories.

Adams, Jerry Jo (Scarborough) entered the loving arms of Our...

Send flowers to the Adams family.