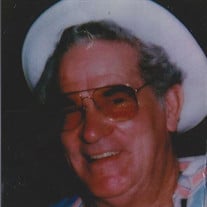 JAMES “DUSTY” BADEN passed away on Thursday, January 20, 2022 in Vinton, Louisiana. He loved his wife, Linda Baden and they had a beautiful marriage and was married on October 16, 1976. He was born in Shreveport, Louisiana on November 6, 1930. He lived life to the fullest and enjoyed every minute of it. He loved to travel and there was not one place he would not try to go. He was a master plumber and was so proud of getting his license. He told his wife, Linda, that the one license he was so proud of was their marriage license. He was a jack of all trades. He would take pride in restoring motorcycles, cars, motorhomes and he was so proud of the home that he built for us. He lived in Georgetown, Texas with his wife and daughter, Denise Flores. Dusty was a very special man. He loved to sing little crazy songs that he would make up and sing to his grandchildren. Dusty was a very loving person and to took great pride in being a devoted husband, father, grandfather, great grandfather and friend. He is survived by his loving wife, Linda of 46 years, his children Margaret Ann Sanburn of Lumberton, Texas; Linda Vaughn and her husband, Dennis of Vidor, Texas; Lucy Leger and partner, Ricky Reese of Port Arthur, Texas; Sherrell Medine and husband, Scott Medine of Napoleonville, Louisiana and Wendy Schell and partner John Baker of League City, Texas. He is also survived by his stepchildren Denise Flores of Georgetown, Texas, Glenn Craft and partner Sandra Gartman of Conroe, Texas and Connie Blanchard and husband Jack Blanchard of Lake Charles, Louisiana. Dusty is also survived by many grandchildren, great grandchildren, nieces and nephews. He is preceded in death by his mother, Lucille Zorn, father, Nolan James Baden, brother, Brent John Baden, sisters, Emma Trombatora, Millette Gable and Nauretta “Rita” Condon. Services will be at held in Southpark Funeral Home at 2:00 p.m., 1310 North Main Street, Pearland, Texas and visitation will be from 1 p.m. until 2:00, burial will be at 8701 Almeda-Genoa Road, Houston, Texas. Pallbearers are, Glenn Craft, Jim Lebanc, John Baker, Kasen Medine, Sean Hardman and Jack Blanchard.

JAMES &#8220;DUSTY&#8221; BADEN passed away on Thursday, January 20, 2022 in Vinton, Louisiana. He loved his wife, Linda Baden and they had a beautiful marriage and was married on October 16, 1976. He was born in Shreveport, Louisiana on November... View Obituary & Service Information

The family of James "Dusty" Novell Baden created this Life Tributes page to make it easy to share your memories.

Send flowers to the Baden family.