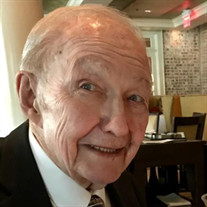 James Edward Baker (Jim) passed away on January 28, 2021. He was preceded in death by his lovely wife, Virginia (Gingie) in 1997. He is survived by six children: Matthew and wife Marie of Austin, Christopher and wife Beth of League City, Peter, Stephen, Timothy and husband Nelson, and his one and only apple-of-his-eye daughter, Juliet and husband Rick of Fort Collins, Co. Also surviving are ten grandchildren and thirteen great-grandchildren. Born in 1927 in Parkersburg, West Virginia, Jim graduated from the U.S. Merchant Marine Academy at Kings Point, NY in 1949. He then joined Lykes Bros. Steamship Co. and worked in a variety of positions, initially afloat but eventually moving ashore to help raise his growing family. At Lykes Bros, he enjoyed camaraderie and long friendships, many of which embedded themselves in Baker family lore. In 1986, he joined the Port of Houston Authority as Director of Operations and retired in 1992. During his career, Jim was deeply involved in navigation safety projects on local shipping channels. In earlier years, he was Chairman of the Port Safety and Advisory Council and Chairman of the Captains' Technical Committee of the West Gulf Maritime Association. From 1982 to 1992, he was Chairman of the Houston-Galveston Area Navigation Safety Committee (HOGANSAC), an official advisory group to the U.S. Coast Guard. In this capacity, he was given the Distinguished Citizen Award by the Coast Guard. He served on two national committees, the Marine Board's investigation into ship piloting practices and the U.S. Coast Guard's committee, VTS-2000, which developed a plan for future vessel traffic systems. Not content to sit still in retirement, Jim served on the boards of the Houston International Seafarers Center and the Houston Maritime Museum. He was very proud of the four years he spent as adjunct faculty of Texas A&M University, Galveston. He was a volunteer for 8 years with the Houston Museum of Natural Science, especially enjoying his time as docent when he would bring and discuss specimens with young students at St. Christopher Grade School. He served as a Lector and Eucharistic Minister at St. Christopher Catholic Church on Park Place Blvd. Jim long considered this his home parish but after a stroke led him to move in with family, he started attending services at the Co-Cathedral of the Sacred Heart as well. At the Co-Cathedral he formed new, heartfelt friendships that complemented the old and dear ones from St. Christopher. Jim was proud of his professional work but to those who met him his legacy was his humor; to those who loved him it was his wisdom, kindness and compassion. Even in his later years, he taught important life lessons by example: 1. Sometimes you need to be the one who makes the changes that keep a loved one in your life. 2. You don’t have to give into darkness during the hard times; humor helps. 3. No matter how hard someone may try, you never have to pull their finger. Per Jim’s request, there will be no services. In lieu of flowers, donations may be made to the Houston International Seafarers’ Center.

James Edward Baker (Jim) passed away on January 28, 2021. He was preceded in death by his lovely wife, Virginia (Gingie) in 1997. He is survived by six children: Matthew and wife Marie of Austin, Christopher and wife Beth of League City, Peter,... View Obituary & Service Information

The family of James Edward Baker created this Life Tributes page to make it easy to share your memories.

Send flowers to the Baker family.