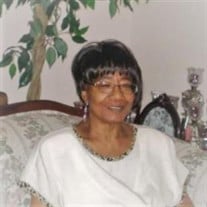 Irma Griffin Edwards was born February 20th, 1942 to Johnnie and Pearl Griffin one of 7 children. She is preceded in death by her parents, children Reginald and Joyce and 3 brothers Bill, Herman, and Howard Griffin. Irma married James Edward Jr. and together they raised 7 children. She lost James on August 18th, 1989. She is survived by her Children Eugene, wife Annette, Joseph, wife Erica, Nina, Pricilla and Kathy; 3 brothers Raymond, wife Lisa, Charles, and Ephraim Griffin, 6 grandchildren Robert, Patrice, Armond, Eisha, LaTasha, Nakeisha, and 4 great grandchildren Zaylon, Zaylie, Zaysia and Summer, 4 sisters in laws Olivia, Mae Helen, Mary, and Marion, and many nieces, nephews, and friends. Irma was baptized in April 1964 in symbolized her dedication to Jehovah the only true God. She assisted many in truth serving as regular pioneer. She was known for excellent cooking skills and loved to serve the circuit overseer during his visit, Irma loved people and was avaible to assist others serving as a caregiver when needed. In 2008 she was diagnosed with Parkinson Disease but maintained her sense of humor throughout her battle. She lost her battle on September 29th, 2020. Special thanks to many friends who made themselves available, who reached out by means of phone calls, meals, visits, flowers, and prayers in her behalf. THANK YOU Please join us in services by following the link provided:http://webcast.funeralvue.com/events/viewer/38085 "With that I heard a loud voice from the throne say: “Look! The tent of God is with mankind, and he will reside with them, and they will be his people. And God himself will be with them. And he will wipe out every tear from their eyes, and death will be no more, neither will mourning nor outcry nor pain be anymore. The former things have passed away.”

Irma Griffin Edwards was born February 20th, 1942 to Johnnie and Pearl Griffin one of 7 children. She is preceded in death by her parents, children Reginald and Joyce and 3 brothers Bill, Herman, and Howard Griffin. Irma married James Edward... View Obituary & Service Information

The family of Irma Jean Edwards created this Life Tributes page to make it easy to share your memories.

Send flowers to the Edwards family.