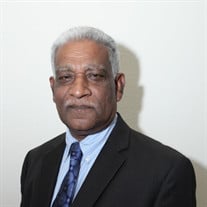 Idicheria Chacko, 74, went to be with the Lord on Wednesday, January 20, 2021. He passed peacefully in his home with his family. Chacko was born on April 08, 1946 to the late I. Idicheria and K.A. Kunjamma, Paramkimamamootil House, Puthur, in Kerala, India. He is the fourth of their seven children. His siblings are Lissy Skariah, Molly Thomas, Ammini Lonappan, Idicheria Abraham, Idicheria Mathew and the late C. George. He studied electrical engineering and graduated from NSS Polytechnic College in Pandalam, Kerala. He married Saramma Thomas, daughter of the late K.G. Thomas and Mariamma Thomas, Kuzhivelikavunkal, Theodical in Kerala, India, on November 30, 1973. In 1974, he joined his wife in Dallas, Texas where she was working as a nurse. They moved together to Pasadena, Texas later that year. Their son, Alex, was born in October of 1975 and their daughter, Susan, was born in July of 1980. Chacko started working at Powell Electrical in September of 1974 to his date of death. He was extremely committed to his work, waking up at 3:30 AM daily to begin his day and often working extra hours. In 1989, he was promoted to Leadperson – a role in which he remained until he passed. Although, we discussed retirement often, he wanted to continue working. Chacko lived for his family and loved them immensely. He was a hands-on father and treasured time with his family. He was blessed to see both of his children married and then enter into one of the best stages in his life, being an Appachen (grandfather). He adored his grandchildren and could not wait until the next time he would see them. Chacko enjoyed taking care of their garden and krishi (plants), working hard for his church and selflessly helping others as much as he could. He had a great talent and appreciation for maintaining his home and fixing things himself. He has been a member at Maranatha Church-Houston for over twenty years. He is survived by his wife of 47 years, Saramma Chacko, their son Alex Chacko and his wife Bianca, and grandson Xander, his daughter Susan Chacko Thomas and her husband Jason, and grandsons Jude, Seth and Sean, along with numerous family members, friends, church family and co-workers. Joshua 1:9 “Be strong and courageous. Do not be afraid; do not be discouraged, for the Lord your God will be with you wherever you go.” Please be mindful of South Park's limitations on number of guests for services and visitation, we are allowing 90 people in our chapel at this time. Chacko family has requested close family and friends only to attend visitation and service at the funeral home. Other's can follow and watch the service live via webcast on the day of. Wake service 01/24/2021 Sunday @ 5 pm :https://youtu.be/hOULVGynYe8 and Home Going service 01/25/2021 Monday @ 1 pm :https://youtu.be/o4qijRG4wVc

Idicheria Chacko, 74, went to be with the Lord on Wednesday, January 20, 2021. He passed peacefully in his home with his family. Chacko was born on April 08, 1946 to the late I. Idicheria and K.A. Kunjamma, Paramkimamamootil House, Puthur,... View Obituary & Service Information

The family of Idicheria Chacko created this Life Tributes page to make it easy to share your memories.

Idicheria Chacko, 74, went to be with the Lord on Wednesday,...

Send flowers to the Chacko family.