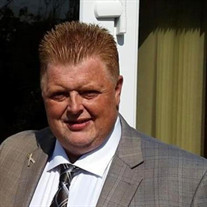 Iain Macarthur Maclean, 56 years of age passed into eternity on Sunday April 3, 2022. Iain was born on February 12, 1966, to Callum and Catherine (Macarthur) Maclean in Stornoway, Isle of Lewis, Scotland. He was born into a family that adored him from the moment he was born. Parents were thrilled to welcome, with much pride and joy, their beautiful baby boy who grew into a vibrant, hardworking man. Iain was the oldest of their two children. Growing up Iain enjoyed an active life in Stornoway. He was a member of the Boy Scouts and the Air Training Corps, as well as being attendant at many sports clubs, including swimming, golf, and rugby. He was also very musical playing both the accordion and the bagpipes and singing psalmody at his local church Iain’s aptitude for all things mechanical led him to train as a mechanical and production engineer and eventually led him to the United States of America to pursue a career in the repair and maintenance of gas turbine engines. Iain was well known and widely respected in his professional life. Iain met the love of his life Denise. They were married on October 11, 2002, in Simpsonville, SC where they lived for many years until relocating to Pearland, TX. Iain is survived by his loving wife Denise Maclean of Pearland, TX, his parents Callum and Catherine Maclean of Scotland, his sister Kirsteen J. Maclean also of Scotland, and numerous friends who he called family. Iain will remain in our hearts forever. We loved him completely, and shall miss his love, smile, sense of humor and enthusiasm for life. Live Stream Link : http://webcast.funeralvue.com/events/viewer/72198

Iain Macarthur Maclean, 56 years of age passed into eternity on Sunday April 3, 2022. Iain was born on February 12, 1966, to Callum and Catherine (Macarthur) Maclean in Stornoway, Isle of Lewis, Scotland. He was born into a family that adored... View Obituary & Service Information

The family of Iain Macarthur MacLean created this Life Tributes page to make it easy to share your memories.

Send flowers to the MacLean family.