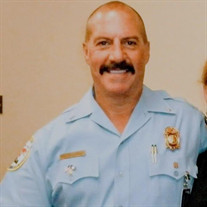 Houston Joesph LaFleur. 66, of Houston, Texas went to be with our Lord and Savior on Monday March 29, 2021 from an unexpected heart attack. Even through a failing heart took him away from this earth , his loving heart left a beacon of light. Houston was born on September 13, 1954 to the late Houston Joesph LaFleur Sr. and Beatrice Montou in Houston, Texas. He was the youngest of three. After gradating from Furr-McReynolds Wheatly- HTI in 1973. He went to Houston Fire Academy 1973-1974. Houston dedicated his life for 35 years, 2 months, and 28 days to Houston Fire Department. From Dec. 1973- Jul. 2009- Iron worker/ EMT/ Pumper Chauffer/ Fire Fighter/ Engineer/ Retired Fire Marshal. He found real honor and dignity in his career. Houston will be fondly remembered by his devoted and loving wife of 15 years, Marcy Ainsworth, grand daughter Mariyah Holton, sister-in-law Sherry Douget, niece Kim Pavelock and husband Darrel, nephews Wade Douget and wife Terressa, Joel Douget and wife Tammy, Donny Douget and wife Carolyn, and many more family and friends. Houston was a very special, loving, kind man. In his younger days he loved to go to Louisiana were his family is from. They would spend there summers at the camp house. He and his cousins learned to swim in Lake Calcasiey. Houston was so proud of his two brothers, Dan Douget was a D.P.S Officer and then sheriff of Madisonville, Texas and Gene Douget was also with the Houston Fire Dept. and Judge of Luckenback, Texas. He had many interest. There was his brother fire fighters, Wings Over Houston at Ellington, Houston Livestock Show and Rodeo, Charities which he was the founder of Cruzin to Cure Breast Cancer and love to ride with his biker friends. He made many friends over the years. Houston was a simple man, he loved playing and spending time with his grand daughter Mariyah and would torment our chiweenie dog Dubby. He enjoyed watching television, some favorite shows were John Wayne movies, Law and Order SVU, Chicago P.D., History Chanel, Pawn Stars, Racing, Gun Shows, American Pickers and many more. Houston was proceeded in death by his father Houston Joesph LaFleur Sr. , mother Beatrice Monton, brothers Daniel and Gene Douget, sister-in-law Becky Douget, step children Gail Sawyet, Jessi Ainsworth and other aunts, uncles, cousins, and friends. A celebration of Houston will be held at. South Park Funeral Home, 1310 N. Main St. Pearland Tx. 77581 Visitation- Thurs. April 8 @ 4-5 Immediate Family April 8 @5-7 Family and friends Funeral- Friday. April 9 @ 2:00 pm There will be a gathering after the service at : Rio Grand Hall 3629 , 10505 Telephone Rd, Houston Tx 77075 Phone: 281-755-2093 (Marcy) I Lieu of flowers, please donate to Alzheimers Association 800-272-3900 Please follow us for the service by clicking on the link provided: http://webcast.funeralvue.com/events/viewer/51842/hash:F85489CE559E7482

Houston Joesph LaFleur. 66, of Houston, Texas went to be with our Lord and Savior on Monday March 29, 2021 from an unexpected heart attack. Even through a failing heart took him away from this earth , his loving heart left a beacon of light. Houston... View Obituary & Service Information

The family of Houston Joseph Lefleur Jr created this Life Tributes page to make it easy to share your memories.

Houston Joesph LaFleur. 66, of Houston, Texas went to be with...

Send flowers to the Lefleur family.