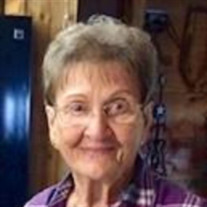 She was born September 12, 1933 in Iowa Colony, TX. She attended Catholic church, which was held at her grandmas’s house. The priest would come from Sugar Land once a month and say mass in the living room. As time passed a church was built on the Scandlin Plantation in Arcola. She became a member there. Later as years passed a new church was built; which is now Sacred Heart of Jesus Catholic Church in Manvel, TX. She was president of the altar society, euchariststic minister and helped with the Third Age Group. She volunteered as much as she could and especially liked helping with the auction at the church bazaars and fire department barbque’s. Helen and Ed helped with every fire department barbque and auction that was held in Iowa Colony. She is preceded in death by her husband Edward Louis Schlitzkus, Sons Edward Louis Schlitzkus Jr, and Randell Keith Schlitzkus; daughter Debra Kay Schlitzkus Clendennen. Mother – Albina Marie Valusek, Father – John Valusek, Five brothers and two sisters. She is survived by her son in Paco Clendennen, Sisters in law Maris Mager and Elva Valusek. Helen and Ed also helped at every bazaar held at this church from the time they moved to Manvel in the early 1960’s until he passed away in 1987. Thereafter, she attended Sacred Heart until she moved in the early 90’s. She became the first woman firefighter in Manvel. If she was home she made every call that came in to the Fire Department. I remember stories of wrecks, fires and may other calls. Along with words of caution passed along to loved ones when she returned home. She received a plaque for Firefighter of the Year from Jack Smith of Texas A&M. She also had a huge hand in starting the first little league baseball team which was a great success in Manvel. After the death of her husband she moved to Onalaska TX. She volunteered while attending St. Joseph Catholic Church and also with Onalaska Sr. Citizen group. She loved doing things for other people and she was very a very caring person. But if there was a Texas Ranger game on the TV, you can bet she was at home watching the game. She loved all sports and could name all the players of each team. She loved outdoor activities, especially camping, fishing and hunting. She played the clarinet in high school and continued on with her music playing through the years. She played the dulcimer with the Livingston Dulcimer Club. She also picked up the harmonica while watching TV, she could play the keyboard and guitar as well. She moved to Carriage Inn independent living in Huntsville. Again, she volunteered and helped the coordinator with others that might need a hand. She then moved to Crockett. She attended St. Francis Catholic Church. She enjoyed going to the senior citizen center and loved fellowship with others. She was a member of KJZT lodge #96 and vice president of Woodmen Life Chapter #4652. I loved all my nieces and nephews. But there was one that was the apple of my life, Denise Shoemake. Denise and Bobby Shoemake were very special to me, there are too many memories to mention them all. Denise’s back porch was and always will be the gathering spot for family functions. Helen loved playing with her great nieces and nephews. Every birthday, anniversary and holiday was celebrated there.

She was born September 12, 1933 in Iowa Colony, TX. She attended Catholic church, which was held at her grandmas&#8217;s house. The priest would come from Sugar Land once a month and say mass in the living room. As time passed a church was built... View Obituary & Service Information

The family of Helen Mary Schlitzkus created this Life Tributes page to make it easy to share your memories.

Send flowers to the Schlitzkus family.