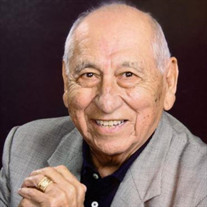 Gilbert Joe Cisneros died January 27th of heart failure. He was 95 years old and passed away peacefully, surrounded by his family. He lived an extraordinary life filled with faith in God, love for family and service to community. Born in San Antonio, Cisneros was only 16 when he obtained his mother’s approval and enlisted in the Navy during WWII. Cisneros was literally blown off the USS John Penn on Aug 13, 1943, during battle action off Lunda Point, Guadalcanal. The ship was sunk by a Kamikaze pilot, more than half the ship’s population perished in the fiery aftermath. After being released from medical care, he was sent back to the front lines onboard the USS President Adams which participated on the initial assault during the hazardous and extended Iwo Jima Operation. The ship was under fire of enemy show batteries and attacks by enemy aircraft. Cisneros was charged with the responsibility of landing troops and cargo under enemy fire. After the island was secure, Cisneros saw the American flag being raised and said he knew he was finally going home. Besides the being awarded the Purple Heart, he earned a lengthy list of commendation including an Asiatic Pacific Campaign Medal with three Bronze Stars, a Naval Commendation Ribbon and a Philipine Liberation Medal. He was 20 years old. After an honorable discharge, Cisneros married the love of his life, Angela Menchaca and they remained at each other’s side for 67 years. Cisneros moved to South Houston in 1963 as part of the first wave of employees hired at NASA. He worked as a Mechanical Engineering Technician, manufacturing equipment needed for space flight. Cisneros worked closely with Astronauts, developers and engineers creating technology never before seen by the world. He worked on all Apollo missions, as well as Skylab, Apollo-Soyuz, and Challenger. Cisneros graduated from the Harris County Sheriff’s Academy in 1971 and worked as a reserve officer, then as a Deputy Constable for Harris County Precinct 8. He later served as an officer for the city of South Houston Police Department. Afterward, Cisneros served as Police Commissioner for South Houston and on City Council. After retiring from NASA, Cisneros worked for Pasadena ISD as a security officer at Pasadena High School and later escorting high-risk students to alternative school. Throughout his life, Cisneros was a man of faith volunteering and participating in church activities at St Pius Catholic Church in Pasadena. He was a member of the Knights of Columbus and enjoyed the fellowship and fundraising. Cisneros greatest loves were his wife and daughters. In his death, he joins his beloved wife Angela and daughter Sylvia. He is survived by daughter Cynthia and her husband Stuart and their children; Arnold Cisneros Brown and Henley Cisneros Brown and Sylvia's husband Michael Meyers and their son Auston Meyer. To livestream funeral service, please click on link below: http://webcast.funeralvue.com/events/viewer/47149

Gilbert Joe Cisneros died January 27th of heart failure. He was 95 years old and passed away peacefully, surrounded by his family. He lived an extraordinary life filled with faith in God, love for family and service to community. Born in... View Obituary & Service Information

The family of Gilbert Joe Cisneros created this Life Tributes page to make it easy to share your memories.

Send flowers to the Cisneros family.