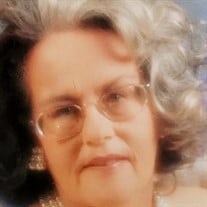 Let us come together in joyous celebration that Gayle Patricia Gaddis was received by our Heavenly Father on January 3, 2021. She was born on November 30, 1943 to the late Charles Gottlick and Bernadette Gottlick of Scotch Plains, New Jersey. After graduating Scotch Plains-Fanwood High School, Gayle began working at Lockheed Martin where she eventually received a promotion necessitating the relocation to Houston, Texas. There she met the love of her life, Captain Edwin Glenn Gaddis of the Houston Fire Department to whom she was happily wed for over 47 years. The two would eventually settle down in Pearland, Texas in order to raise their three sons and build a happy life together. After serving many years in her role as a dedicated housewife and devoted mother, Gayle re-entered the workforce as the city secretary, tax-collector, and notary public for the city of Brookside Village, Texas until she retired in 1995 in order to spend time with her six grandchildren who were her greatest pride and joy. The creativity and love she put into all the family camping trips and family vacations over the years will be a source of great memories by all those who have survived her which include sons Glenn Gaddis and Gary Gaddis; daughter-in-laws Angela Gaddis and Rose Gaddis; grandsons Justyn Glenn Gaddis, Taylor James Gaddis, Shane Patrick Gaddis; granddaughters Stephanie Patricia Gaddis, Abigail Marie Gaddis, and Mallory Alexis Gaddis; great-grandchildren Autumn Rose Gaddis, James Patrick Gaddis and Jonathan David Gaddis; and, friends of the family Stephen “Stevito” Mora and Sheila Marie Gaddis, and James and Betty Jo Leach. Gayle is also survived by her brother Russell Gottlick, wife Joyce Gottlick, their children April, Donald, Valerie, Emily and Grace, and their grandchildren; her sister Bernadette Gottlick, husband George Lopez, and their children Andrew and Bernadette Sara, and their two grandchildren; and her dear sister-in-law Maureen Gottlick married to her late brother Charles Gottlick, their children Marc Gottlick and Jennifer Gottlick, and all of their grandchildren; her aunt Margie and many cousins whom she was so fond of; her sister-in-law Pat Reeves along with her children, grandchildren, and great-grandchildren. Gayle is preceded in death, among other cherished family and friends, by her parents, mother-in-law Willie Mae Hopkins, brothers Donald Gottlick and Charles Gottlick, as well as her brave son Houston Police Officer Guy Patrick Gaddis who was taken away from his mother at the tender age of 25, falling in the line of duty. The tragic loss was one of the lowest points in Gayle’s life, but through the strong bonds she and her husband had created for their family, she was able to lift her family back up and rise above the injustice and loss.

Let us come together in joyous celebration that Gayle Patricia Gaddis was received by our Heavenly Father on January 3, 2021. She was born on November 30, 1943 to the late Charles Gottlick and Bernadette Gottlick of Scotch Plains, New Jersey. After... View Obituary & Service Information

The family of Gayle Patricia Gaddis created this Life Tributes page to make it easy to share your memories.

Let us come together in joyous celebration that Gayle Patricia...

Send flowers to the Gaddis family.