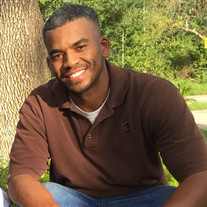 Gabriel Ambrose Haskin was born on February 15, 1976 to Fred and Gerry Haskin in Houston, Texas and he departed this physical world on October 6, 2020. Gabe was a happy, loving and inquisitive child. He was gifted with superior intelligence. He was passionate about spending time with his family doing things they enjoyed like playing Xbox, ping-pong, riding bikes and teaching them about everything in life. He enjoyed watching movies, especially comedies. He had a zest for life and did thorough research about all his passions such as working out and wholesome nutrition - eating to live. Gabe was a member of Jesse H. Jones Vanguard High School graduating class of 1994. He played basketball and golf. Gabe was captain of the golf team for three consecutive years and won 2nd place in district for golf. School participation included the Junior Engineering Technician Society, French Club, Spanish Club, Science Club, GENTS (a community service organization) and the National Honor Society. Helping others was something Gabe thoroughly enjoyed. He spent valuable time as a softball coach for St. Francis Xavier Catholic Church little league team. Some of his volunteer activities were Friends Helping Friends Club and the Docent Program, leading tours for the Houston Museum of Fine Arts. Gabe graduated from high school with honors receiving full academic scholarships to Morehouse College, the University of Texas, Texas A&M and the University of Oklahoma. He was also awarded an academic scholarship to Lamar University and was selected to be a Mundt Scholar in the Department of Civil Engineering. In August 2002, Gabe graduated from the University of Houston – Clear Lake with a Bachelor of Science Degree in both Accounting and Finance. A dedicated employee of UPS for 26 years, he enjoyed the interaction with his customers and his co-workers. As an essential worker, Gabe continued to thrive as a Feeder Driver, loved and missed by co-workers and customers alike. Gabe is preceded in death by his grandparents Eulia and Ambrose Sampay, Christiana Gordon Smith and John Haskin. Our beloved Gabe is survived by his loving wife Wendy and their children Angela Gabrielle and Gabriel Raphael, his parents Fred and Gerry Haskin, his mother-in-law Flor Mejia, one sister Denise (Tyrone), four brothers, Danny (Angele), Dennis (Daphne), Bilal (Chu Chu) and Jonathan (Andrea), three brothers-in-law, five sisters-in-law and a host of nieces, nephews, relatives and friends.

Gabriel Ambrose Haskin was born on February 15, 1976 to Fred and Gerry Haskin in Houston, Texas and he departed this physical world on October 6, 2020. Gabe was a happy, loving and inquisitive child. He was gifted with superior intelligence.... View Obituary & Service Information

The family of Gabriel Ambrose Haskin created this Life Tributes page to make it easy to share your memories.

Send flowers to the Haskin family.