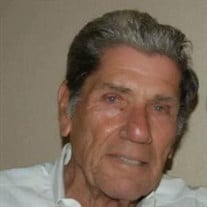 Erwin Marion Dodson, age 89 of Alvin, Texas passed away Wednesday, February 23, 2022. Erwin was born August 11, 1932, in Halls Summit, Red River Parish, Louisiana and a resident of Alvin Texas for 56 years. His early childhood was spent on a farm in Louisiana where he learned to sort eggs and tell the difference between which egg would produce a rooster or a hen. As a young boy he lived in Galveston and over time gathered enough parts to build his own bicycle. Erwin graduated from LaPorte High School and served his country in the United States Air Force. In June 1955 he married Sandra Clements and they welcomed three children Cynthia, Douglas, and Gary. They were married 64 years and their family expanded to include 5 grandchildren and 5 great grandchildren. After starting his career with Montesano in the early 1960’s he moved his family to Alvin in 1965 working as a maintenance supervisor until his retirement at age 55. He continued working in Petrochemicals as a salesman until age 79 when he fully retired. Erwin had many passions including raising plumerias and citrus trees, listening to and collecting music, procuring unique coins and gold pieces and a true lover of animals and bass fishing. Erwin belonged to a bass club, competing in, and winning many tournaments. He always wanted to catch the biggest fish and as he did in everything, he went all in, learning and investing fully. Definitely a giver, a sharp wit, relentless kidder, never afraid to tell you what was on his mind and always a true friend to too many friends to mention. Erwin was preceded in death by his parents Marion Erwin “Swede” Dodson and Willie Thelma Gearrealds, his wife of 64 years Sandra Dodson, his sons Douglas and Gary Dodson and siblings Byron, Billy, and June Dodson. Erwin is survived by his daughter Cindy Romeo (Edward) sister Cordelia ‘Sis’ Spampanato, Margie Lyons, Bobby Dodson, Marion Walsh, Charles Dodson along with extended family and many loving friends. The family would like to thank his care givers at Proverbial Care and those would have reached out to them during this difficult time. In lieu of flowers, Erwin would appreciate your remembrance by contacting South Park Baptist church with donations to provide support to children in need during the holidays. To access LIVESTREAM of funeral service, please click the link below: http://webcast.funeralvue.com/events/viewer/70290/hash:E997997F21375C83

The family of Erwin Marion Dodson created this Life Tributes page to make it easy to share your memories.

Send flowers to the Dodson family.