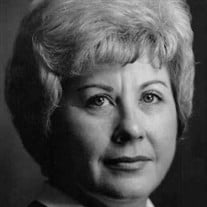 Eloise Smith, 83, former Mayor of the City of South Houston, passed away peacefully in her home on Monday, November 1, 2021. She was born on January 16, 1938, in Phelps, Texas, to Malcolm Collier, Sr. and Pearl Utz. Eloise was preceded in death by her parents, Malcolm Sr. and Pearl, brother Malcolm Collier, Jr., sister Ruth Lewis and brother-in-law Earl Lewis, nephews Larry and Chris Lewis, and great nephew, Darrel Lewis. She is survived by her husband Hal Smith, son Warren Smith of Deer Park, and daughter Heather Smith Enberg (husband Jaron) and grandsons, Micah, Elijah, and Luke Enberg of Littleton, Colorado. Eloise was a devoted wife to her husband of 36 years, Harold (Hal) Smith. They were inseparable, and she often told her friends that he was the love of her life. No one could bring joy to her more than her sweet Hal. Eloise was very active in her community and served as Mayor of South Houston from 2001 until 2005. She previously served on South Houston City Council for a number of years. She will always be remembered as a generous and loving soul who treated everyone with dignity and respect. She was a patriot and strong advocate for conservative principles who valued individual social and moral responsibility. Eloise moved to the Houston area at an early age. She was an industrious young lady, and as a youth, worked at Danburg’s Department Store. One day a young man walked in and began talking to her co-worker. Eloise recalled that she had absolutely no interest in talking with him because he was behaving like such a snob. His name was Elvis (Presley). Eloise will always be remembered as a loving wife, mother, grandmother and fiercely devoted friend! A devout follower of Jesus Christ, Eloise exercised her faith through her gift of compassion. She always was first to reach out and meet the needs of people in the community, countless those she had never met. Eloise opened her heart and home to many. She loved to cook, spend time in the garden, and had the ability to make everyone feel special. Eloise loved children, and they were noticeably drawn to her sweet spirit. A Visitation will be held at South Park Funeral Home, 1310 N. Main Street, Pearland, Texas, on Saturday, November 6, 2021, beginning at 1:00 pm, followed by a funeral service at 2 o’clock in the afternoon, with graveside service following. In lieu of flowers, the family asks that memorial contributions be made to Project Joy & Hope, 3207 Tulip Street, Pasadena, TX 77504 (www.joyandhope.org) to benefit seriously ill children and their families, or an organization of your choice. If you are not to join the family for the service on Saturday you may click this link. http://webcast.funeralvue.com/events/viewer/63220/hash:3EB64986EE4F6A7E

Eloise Smith, 83, former Mayor of the City of South Houston, passed away peacefully in her home on Monday, November 1, 2021. She was born on January 16, 1938, in Phelps, Texas, to Malcolm Collier, Sr. and Pearl Utz. Eloise was preceded in death... View Obituary & Service Information

The family of Eloise Evelyn Smith created this Life Tributes page to make it easy to share your memories.

Eloise Smith, 83, former Mayor of the City of South Houston,...

Send flowers to the Smith family.