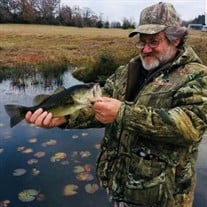 Donald D. Williams, born on September 9th of 1953 in Toledo, OH to Victor L. Williams and Ruth Marie (Jensen) Williams. Passed on February 5th of 2021, after a long 7 year battle with colon cancer. He had family and friends with him on his last days. He was preceded in death by infant daughter Ann Marie Williams, parents Victor & Ruth Williams, sister Susy Hoover and grandson Luke Williams. He is survived by his wife of 47 years Desira A. Williams, sons John Williams and wife Aimee, Greg Williams, Eric Williams and wife Tia, Mark Williams and wife Charlotte. Grandchildren Jacquelynn and Aurora Williams, Bethany Mills, Shelby and Amber Mickey, Aaron and Evan Williams, John Swafford, Kobi Rainer-Williams, David and Katelynn Williams. Along with being Grandpa, Pepaw and Papa to his grandchildren he also leaves behind several men that considered him to be a second father to them. David and Michael Smarrella, Billy Oldham, Dale and Danny Mogford, Josh Cain and Jon Hermanson. Brothers and sisters also left behind are Ed Williams and wife Carolyn, Roger Williams and wife Charlene, twin sister Laura Fisk and husband Donald, Patrick Wiliams and wife Juanetta, Andy Wiliams and wife Debby, Larry Hoover husband to Susy and youngest sister Vicki Melms. Would like to acknowledge, close friend of 35 years Kenneth Hedge. Don worked for Hostess Cakes as a truck mechanic for 30 years. During this time as he often traveled for his job he had never met a stranger. He was always willing to lend a helping hand to any one in need. From helping someone stranded on the side of the road to taking the elderly neighbor to the grocery store. He was also involved with Little League Baseball and other school sports over the younger years with his children. During this time his love for sports such as baseball and football became stronger. You could often find him watching baseball with his dog Elenor barking right beside him during the game. Every couple of years he would go and watch the drag racing events in Baytown. He loved the outdoors, along with teaching his children and grandchildren the ways of working with his hands. Funeral Service and visitation will be held at ARISE Church at (time) located at 2121 Genoa Red Bluff Rd., Pasadena, TX 77505. In lieu of flowers please consider donating to MD Anderson Research Center or a charity of your choice. Family and friends planning to attend the service, please contact a family member for further information.

Donald D. Williams, born on September 9th of 1953 in Toledo, OH to Victor L. Williams and Ruth Marie (Jensen) Williams. Passed on February 5th of 2021, after a long 7 year battle with colon cancer. He had family and friends with him on his last... View Obituary & Service Information

The family of Donald Dean Williams created this Life Tributes page to make it easy to share your memories.

Send flowers to the Williams family.