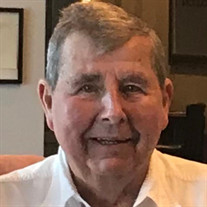 Donald Knapp (Papa), 80, passed away peacefully October 1, 2021 in his home with his family by his side after a short battle with Pancreatic Cancer. He was born on October 23, 1940 in Syracuse, NY to Donald and Dorothy Knapp. He is preceded in death by his wife of 52 year, Mary Ann Knapp, his parents Donald and Dorothy and two brothers, Robert and Richard. He is survived by his children, Mike Knapp (Cindy), and Kelly Freyaldenhoven (James), one brother David, and his loving grandkids, James, Jacob, Shannon, Chris, and Jennifer, and two great grandkids, Landon and Skylar. His grandkids and great grandkids were his “caddies” as he loved the game of golf. Don was a long time resident of the South Belt area after moving from Syracuse NY with his wife and two young children in 1967 to work at the NASA Johnson Space Center for General Electric where he started his career in Syracuse in 1959. He continued to work for General Electric and then Lockheed Martin for 52 years until his retirement in 2011. Family and friends were most important to Don. He was very active in all his kids activities and spent countless hours at the ball fields and practice fields with his kids. He is a past president of Sagemont/Beverly Hills Little League as he enjoyed leading people. He enjoyed making new friends wherever lived. Including Watercrest Senior Apartments in Pearland for 3 years and most recently his house in Woodforest with his “Roadrunner neighbors”. Papa loved to pass along his wisdom to his kids and grandkids and anyone else that would listen. He loved to share his “lists” of thoughts, suggestions, and encouraging words with his grandkids and great grandkids and relished in hearing of their accomplishments in school and was always curious what their favorite subjects were and why. In his spare time, Don enjoyed the wonderful game of golf and played his entire life up to about 3 years ago when a broken ankle sidelined him from the game he loved. He was masterful around the greens and was lucky enough to experience a hole in one. He really enjoyed his golf buddies that he had regular Saturday morning tee times at Evergreen Point in Baytown. The family would like to thank Dr. Arani and all the wonderful administrators, nurses, and employees at Millennium Hospice for taking care of dad during his final few months. Everyone was incredibly caring and supportive to dad and the family. A visitation will be held at South Park Funeral Home in Pearland, Texas on Tuesday, October 5, 2021 from 5-7 and funeral services will be held at St. Helens Catholic Church in Pearland Texas at 10am Wednesday October 6, 2021 with graveside services immediately following at South Park Funeral Home Cemetery. In lieu of flowers, please make a donation to hospice or any charity of your choice.

Donald Knapp (Papa), 80, passed away peacefully October 1, 2021 in his home with his family by his side after a short battle with Pancreatic Cancer. He was born on October 23, 1940 in Syracuse, NY to Donald and Dorothy Knapp. He is preceded... View Obituary & Service Information

The family of Donald Edward Knapp created this Life Tributes page to make it easy to share your memories.

Send flowers to the Knapp family.