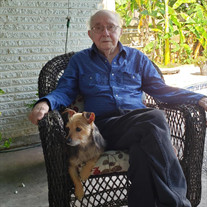 Friday, Donald Ray Sr., went to meet his heavenly father on Wednesday June 9, 2021 from his home in Pearland Texas at the age of 81. Don was born in Campti, Louisiana to Lemon and Mittie Friday. Don was preceded in death by his wife Mary (Harmon) Friday of 37 years, his mother Mittie, father Lemon, brother’s Howard, and Cecil, sister’s Carmie, and Ivy Dale. Don is survived by his sister Dorothy Lee (Paul Holcomb) of Benton La. His 4 children, Donnie Friday Jr. of Sonoma California, Kathy (Sherman) Smith of Rio Vista California, Tammy Warford of Galveston Texas, Robin (Roger) Toll of Pearland Texas, whom Don lived with for 5 years, up until the time of his passing. 7 grandchildren, Jarod, Brandon (Rachel), Christopher (Josephine), Elycia (Paul), Justenn, Megan, and April. 1 great granddaughter, Ella Rose. Don’s passion and profession was an automobile mechanic. He first began working alongside his dad at the family owned business Friday’s automotive shop/gas station, in Bossier city, La. Don would work after school each day and on weekends at the shop with his dad. When Don graduated from Bossier High School in 1957 he began working full time at Friday’s automotive shop until he moved to Napa California in approximately 1968. He first began working as a mechanic at the dealership Good Chevrolet, over the years he worked for multiple dealerships. The last dealership he worked for was Valleywood Chevrolet where he was the service manager. The owner of Valleywood Chevrolet also owned a dealership in Angleton Texas. There was a need for a service manager of Don’s caliber and experience. Don agreed to relocate to Texas for a short time to run and improve the service department in which he was successful in doing. Don was looking for a new challenge which led he and Mary to Pearland Texas, where they decided to start their own business, Don’s Auto repair. Don had many successful years and devoted customers at his shop until he retired in 2017. When Don was not working you would find him thoroughly enjoying one of his two hobbies. Coaching a local little league baseball team, or spending time riding and caring for one of his many horses he and Mary owned. There will be a private celebration of life for Don at his son Donnie’s home in Sonoma, Ca. along with other family members in attendance. Don’s final wish was his ashes be spread and joined with his wife Mary’s at their chosen special location.

Friday, Donald Ray Sr., went to meet his heavenly father on Wednesday June 9, 2021 from his home in Pearland Texas at the age of 81. Don was born in Campti, Louisiana to Lemon and Mittie Friday. Don was preceded in death by his wife Mary (Harmon)... View Obituary & Service Information

The family of Donald Friday created this Life Tributes page to make it easy to share your memories.

Send flowers to the Friday family.