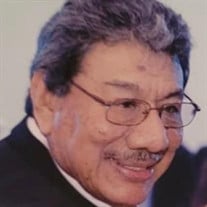 Diego Verdines Sr. was born November 13, 1941, in Jaumave Tamaulipas. He passed away on June 10, 2021, at the young age of 79 in Pasadena TX. Diego is preceded in death by his wife of 46 years Rosalva Verdines, Father Anastacio Verdines, Mother Maria Canuta Verdines, Brothers: Jacinto Verdines, Jose Guadalupe Verdines, and Eugenio Verdines. He is survived by his sister Maura Verdines Pena, his companion for the last six years Maria Ochoa, his children Diego Verdines Jr. (m. Lucia Verdines), Oscar Edibaldo Verdines (m. Myrna Verdines), Rosa Ivonne Grote (m. Robert Grote), Diana Guadalupe Garza (m. Greg Garza). Grandchildren: Greg Garza Jr., Diego Verdines III, Ayleen Garza (m. Gabino Jimenez), Natalia Verdines, Ramona Angela Garza, Valeria Verdines, Alyssa Kate Verdines, Hanna Verdines, Sophia Ivonne Grote. Great grandchild: Abraham Ezekiel Jimenez. He will be missed by numerous other family, friends, and neighbors. Diego or Toto as his grandkids would call him was a kindhearted soul who made everyone, he met feel at home. He had a passion for life and started on his goals quickly, he moved from his small town in the mountains of Tamaulipas to the city of Victoria. In Victoria, he fell in love with learning at the Industrial School of Specials. The knowledge he gained in Victoria provided him with the opportunity to move to Monterrey, Mexico. While in Monterrey he met a beautiful young woman, who would later become the love of his life. They built a life together and started a family. Working in Monterrey opened doors not only in Mexico but in the United States as well. While working in the U.S. in the field of turbo machinery he always made time to visit his family in Monterrey. The kids always knew when he arrived because he would always place their favorite American chips, candy, and other snacks on the kitchen table. He loved being around family and friends and never missed an opportunity to have everyone over for BBQ and watch soccer. He loved carne asada and he loved watching soccer especially the Tigres. You knew when you visited Diego you were going to have a great time! His zest for life brightened everyone’s day. He was always making everyone laugh with his funny jokes and even better stories. He will be sorely missed. If you cannot join us at the funeral home for services, you can join us online by clicking on the link: http://webcast.funeralvue.com/events/viewer/56040/hash:59FC5FA0DD814722

Diego Verdines Sr. was born November 13, 1941, in Jaumave Tamaulipas. He passed away on June 10, 2021, at the young age of 79 in Pasadena TX. Diego is preceded in death by his wife of 46 years Rosalva Verdines, Father Anastacio Verdines, Mother... View Obituary & Service Information

The family of Diego Verdines Sr. created this Life Tributes page to make it easy to share your memories.

Send flowers to the Verdines family.