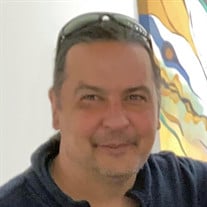 Not sure what to send?

David Carl Nutzman of Sugar Land, TX passed away Thursday evening, January 6, 2022, in a car accident. He was 49 years old. David was the oldest of four sons born to Carl and Louise Nutzman. He was born in San Antonio, Texas at Brooke General Hospital on March 27, 1972. Shortly after, the family moved to Houston, TX. David attended Clements and Kempner High Schools in Fort Bend ISD. He went on to receive a Bachelor of Arts degree in English from the University of Houston in 2005. David spent a summer in France as an exchange student and became proficient in the language, nearly earning an additional language degree. Following college, David worked at several local bookstores and had a dream of someday having his own store. He was an avid reader and loved to write. He accumulated hundreds of books through the years and bought and sold them online. He knew books well. David loved to travel. He had the opportunity to visit most of the lower 48 states with his family as well as many European and North African countries. These included France, Germany, Austria, Switzerland, the UK, Morocco, Spain, Italy, Hungary, and more. He had a deep interest in cultures and people and often gave his parents geography or history lessons along the way. Most of all, David loved to spend time with his brothers and their families. His nieces and nephews meant so much to him. He loved to visit on the phone and made many calls to friends and relatives, sometimes forgetting the time of the day and the time zone. He enjoyed coffee at any hour, especially when shared with family or friends. David looked forward to celebrating his 50th birthday in March. David is survived by his parents Carl and Louise Nutzman of Sugar Land, TX and his brothers and their families: Brian and Anita, Ryan and Devika of Fort Collins, CO; Philip and Giselle of London, England; Travis and Jenny, Elena, Ava, Brandon and Juliana of Sugar Land, TX. David’s outgoing personality and French language skills also led to the addition of another brother, Cherif Ouedraogo and wife Melissa of Forney, TX, to the Nutzman family. He is survived by many aunts, uncles, cousins and friends. He held a special place in his heart for all of them. David is preceded in death by his grandparents, Marvin and Gertrude Nutzman and Clarence and Lucille Smith, as well as Uncle Charles Smith, Aunt Louise Smith and Uncle James Waskow. Services for David will be held on Saturday, January 22, 2022, at the Pearland South Park Funeral Home. Pastor Tyler Moore of Christ Memorial Lutheran Church - Houston will officiate. The service will be live streamed. In light of Covid, the family encourages use of the link provided to watch from home. Internment at South Park Cemetery immediately following the service. In lieu of flowers, donations in David’s name may be mailed directly to Hope Fort Bend Club House, 912 S 6th St, Richmond, TX 77469 or a charity of your choice. Hope Fort Bend Clubhouse is dedicated to growing a community of achievers living with mental health conditions who are empowered to thrive through education, productive work, and meaningful relationships. Please follow the link provided if you are unable to join us for the service: http://webcast.funeralvue.com/events/viewer/67036/hash:6A81F7EC58E03E03

David Carl Nutzman of Sugar Land, TX passed away Thursday evening, January 6, 2022, in a car accident. He was 49 years old. David was the oldest of four sons born to Carl and Louise Nutzman. He was born in San Antonio, Texas at Brooke General... View Obituary & Service Information

The family of David Carl Nutzman created this Life Tributes page to make it easy to share your memories.