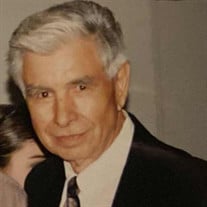 David Hernandez Sr., 89 years old, of Houston, TX, passed away peacefully in his sleep on the afternoon of March 4th, 2021. David was born in Sinton, TX, in 1931 to his parents Gumecindo Hernandez and Maria de Jesus Cantu Hernadez. He was a machinist for M&J Valve for many years and retired in 1995 after working at Precison General. In addition, to his career, David was a member of Immaculate Conception Catholic Church where he served as a Minister of the Eucharist for many years. His devotion to serve others and the Lord centered him as a pillar within his community and to his family. He married the love of his life Amalia Gomez Martinez at the age of 31. They married on April 28, 1963. David is preceded in death by his loving wife, Amalia Hernandez, his parents, brothers Benito Hernandez and Marcelino Hernandez, sisters, Amalia Cavazos and Lupita Cavillo. He is survived by his two children, Belinda Gonzalez (Juan) and David Hernandez Jr. (Francis), grandchildren Lizette Gonzalez and Aaron Gonzalez, Cythia Escareño (Israel), Stephanie Juarez, Steve Juarez and siblings, Belen Cuellar, Virginia Saenz, Dalia Garza, and Jose Hernandez. A celebration of life and services will be held on Tuesday, March 9 – Wednesday, March 10th at South Park Funeral Home, 1310 North Main Street, Pearland, TX 77581. Visitation will begin on Tuesday, March 5th at 5 PM followed by a rosary at 6 PM. Funeral services will be held on Wednesday, March 10th at 10 AM in the morning. A burial will follow at South Park Cemetery. Romans 14:7-9 Life and death are both in God's hands. “Brothers and sisters: No one lives for oneself, and no one dies for oneself. For if we live, we live for the Lord, and if we die, we die for the Lord; so then, whether we live or die, we are the Lord's…” If you cannot join us online, you can join us by clicking on the the link provided;http://webcast.funeralvue.com/events/viewer/49676

David Hernandez Sr., 89 years old, of Houston, TX, passed away peacefully in his sleep on the afternoon of March 4th, 2021. David was born in Sinton, TX, in 1931 to his parents Gumecindo Hernandez and Maria de Jesus Cantu Hernadez. He was... View Obituary & Service Information

The family of David Hernandez Sr created this Life Tributes page to make it easy to share your memories.

Send flowers to the Hernandez family.