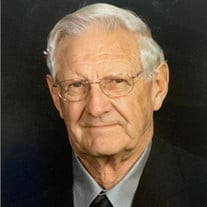 IN LOVING MEMORY CLARENCE EDWARD WHITE AUGUST 26, 1933 – MAY 8, 2021 On May 8, 2021, our respected Clarence Edward White of Friendswood, Texas went to be with our Lord and joined his beloved wife, Coyolyn at the age of 87. Clarence was born on August 26, 1993 in Norlina, North Carolina to George “Buck” and Ethel White. As a young man he enlisted in the US Navy and served his country faithfully during the Korean War. During his time in the Navy, he sailed around the world multiple times while on the aircraft carrier, USS Saipan. Later in his commission, he was stationed in Orange, Texas where he met the love of his life, Coyolyn, on a blind double date. They were married on September 2, 1956 and moved to Houston. In 1966 they settled in Friendswood. Clarence and his family soon joined First Baptist Church Friendswood where he devotedly served the Lord. Clarence was also committed to his cherished community. His support was exhibited through his service as a police officer in the Friendswood Police Department. He also served as a volunteer fire fighter and Fire Chief of the Friendswood Volunteer Fire Department (FVFD). He was instrumental in the design and construction of Fire Station 1 on Friendswood Drive and in obtaining the first ambulance for the FVFD. Clarence was a hard worker and dedicated employee who managed to fulfill a lengthy 35-year career at Goodyear Chemical Plant in Houston, Texas as a chemical operator. All while continuing to serve the Lord, volunteer in his community and spend time with his family. He was a motorcycle enthusiast and deeply passionate about all things with an engine. He spent much of his extra leisure time building and repairing cars as a hobby while garnering the endearing term, “Mr. Fix-It.” He also enthusiastically supported his son’s motorcycle and sprint car racing interests. They enjoyed countless team trips together to participate in racing events throughout the country over a span of many years. Upon his retirement from Goodyear in 2000, Clarence loved spending even more time with his family while traveling in his motorhome and visiting friends. And when not traveling during retirement, he found time once again to serve his community and country by becoming an Election Judge. He was always willing to help family, friends, and neighbors with anything they needed. Clarence was preceded in death by his father, George ‘Buck’ White (1977), his mother, Ethel White (1995) and his dear wife, Coyolyn White (March 13, 2021). He is survived by his brothers, George White, Carl White, and William Waverly White; his children and their spouses, Scarlett and Eddie Weilacher, Coy and Katie White, as well as his grandchildren Logan White Anderson and her husband Aaron Anderson, Paul Weilacher and wife, Yoselin DePaz, Cydney White, Phillip Weilacher, Coy White, Kyle White and his great-grandsons Paul Weilacher and Andy Anderson. The family would like to thank the doctors, nurses, and other medical support staff of Houston Methodist Clear Lake for their incredible care and assistance provided to Clarence and the entire family. The family appreciates all the prayers and concerns extended to us during this time. Burial immediately following service at SouthPark Funeral Home, Pearland, Texas. In lieu of flowers, a donation in honor of Clarence White may be made to any of the following organizations and would be greatly appreciated: First Baptist Church Friendswood 111 East Heritage Drive Friendswood, Texas 77546 Phone: 281-482-7573 Friendswood Volunteer Fire Department 1610 Whitaker Drive Friendswood, Texas 77546 Phone: 281-996-3360 https://www.paypal.com/us/fundraiser/charity/2139583 Friendswood Police Department 1600 Whitaker Drive Friendswood, Texas 77546 Phone: 281-996-3300

The family of Clarence Edward White created this Life Tributes page to make it easy to share your memories.

Send flowers to the White family.