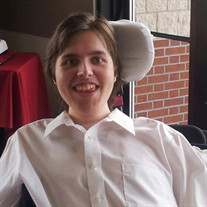 Christian August Weinkauf Jr., 29, tragically lost his lifelong fight against muscular dystrophy on Sunday, March 6, 2022. Chris was born on May 2, 1992, in Angleton, Texas, which remained his place of residence until his passing. He was a 2014 graduate of Angleton High School. Christian, affectionately called “Little Chris” by many, was deeply loved and will be greatly missed. Chris was a naturally shy person, but once you got to know him, he was playful, passionate, and always ready to stand up for what he believed in. He shared these qualities with his closest friend and brother Joshua, who passed due to complications from the same illness in 2016. His family takes comfort in imagining them reunited in Heaven and doing all the things they loved so much together without the limitations of their illness. Their favorite pastimes included cars, Legos, video games, watching movies with their mother, Shawn, and playfully bugging their little brother, Jeffrey. Chris also loved showing off to Jeffrey anytime he did especially well in a game and telling him when he learned of interesting innovations. The time he spent with his family meant the world to him and he would talk avidly about how much he loved his nieces, nephews, and younger cousins. Chris’ biggest role model was his father, Christian Sr., which is who sparked his enthusiasm for cars and many of the topics he was passionate about. He is survived by his father Christian Weinkauf Sr. & his wife Haley; his mother Shawn Henderson Weinkauf; brother, Jeffrey Weinkauf; aunts & uncles, Kathy Hohn, Marnie Biby, Michael D. Henderson & wife Elisa, Lavonda Potts & husband John, Reagan Greak & her husband Joe, Brian Keith Weinkauf, Dustin Rude & wife Tori; grandparents, Suzanne Denham, Beverly Rude & Lorne Rude; as well as numerous cherished cousins and friends. He is preceded in death by his brother, Joshua Kyle Weinkauf; great-grandparents, Gaylon Williams, Frances Curry, Johnny & Hannah Miller, Herbert (John) & Jeannette Heidenreich, Ted & Ella (Dolores) Petropoulos; grandfathers, Warren (Butch) Eugene Weinkauf, Douglas Delano Henderson; & his great aunt Barbara Mills. We plan to pay tribute to his life on Tuesday, March 15. The services will be held at Southview Baptist Church 23003 State Hwy 288, Rosharon, TX 77583. The viewing for immediate family is from 11:30AM to 12:00 PM. Viewing for extended family, friends, and anyone else interested in attending is from 12:00PM to 1:00PM. Memorial Services will be from 1:00PM to 2:00 PM. Afterwards, we will be meeting at his graveside at South Park Cemetery 1310 N Main St, Pearland, TX 77581. In lieu of flowers, we ask that you consider donating to our fundraiser to help us give him the memorial he deserves or contribute to a charity of your choice in his honor.

Christian August Weinkauf Jr., 29, tragically lost his lifelong fight against muscular dystrophy on Sunday, March 6, 2022. Chris was born on May 2, 1992, in Angleton, Texas, which remained his place of residence until his passing. He was a 2014... View Obituary & Service Information

The family of Christian August Weinkauf Jr. created this Life Tributes page to make it easy to share your memories.

Send flowers to the Weinkauf family.