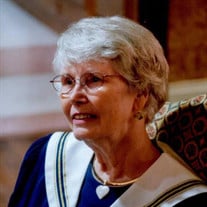 Charliene High Hooker, 76, of Houston, TX, died Wednesday, January 20, 2021, due to COVID-19 after declining for many years related to Alzheimer’s Disease. Charliene was predeceased by her parents, Jerald and Lucille High, and her brother Gene High. She is survived by her husband, William Hamilton, her son Jay Hooker and his husband Rick Ankrom, her daughter Jonna Hooker Whitman and her husband Doug Whitman, step-daughter Leigh Bogar and her husband Joe Bogar, step-son Mark Hamilton and his wife Stephanie Hamilton, seven grandchildren, Meredith and Reed Whitman, Kristin Satterfield and her husband James Satterfield, Kathryn Bogar, Henry, Robert, and Michael Hamilton, and her brother and sister-in-law, Terry and Kathy High. Charliene was born in Grand Prairie, Texas, and attended Grand Prairie High School, graduating in 1962. She and her first husband, John C. Hooker, spent their early married years in Stillwater, OK, and Fort Worth, TX, before settling in Houston, TX. In Houston, they found their spiritual home at Covenant Church. Charliene was dedicated to her family and career, and had many successful years in the financial services industry. Her independence and drive afforded her success in the male-dominated field. She raised her two children to be loving, strong, and independent, modeling compassion coupled with drive, and encouraging them to lead lives of meaning and purpose. She was a wonderful combination of a strong woman, as well as a lover of beautiful things, including Texas wildflowers, beautiful meals, or a perfectly wrapped Christmas gift. She married Bill Hamilton in November of 1982, and they soon moved to San Antonio, TX. Over the years Charliene and Bill would move many times for work, landing in San Francisco, CA; Coral Gables, FL; Huntsville, AL; and Las Vegas, NV before retiring to their beloved Hill Country in Fredericksburg, TX. As Charliene’s health was declining, she and Bill ultimately returned to Houston to be closer to family. Although they moved frequently, Charliene and Bill connected deeply with each community, both in their careers and church lives, making and maintaining dear friendships along the way. Charliene and Bill were utterly devoted to each other. Their love was apparent, and many thought they must be newlyweds because they so obviously cherished each other and were inseparable. As her health declined, Charliene’s ever-present smile never wavered, and she continued to greet others with bright eyes and a cheery “It’s so good to see you.” Even when she was no longer able to converse, the one phrase Charliene never lost was, “I love you,” which she shared freely not only with Bill but also with other family members, caregivers, and friends. A life-long member of choirs, Charliene’s love of music sustained her to the end, as she was able to sing along and tap to the beat, even when words failed her. Charliene was gentle and graceful, yet strong, and will be sorely missed by her family and friends. We cherish the memories of her beautiful smile and love so freely given. In lieu of flowers, memorial contributions may be made to Covenant Church, https://www.covenanthouston.org/charliene-hookers-memorial-page.html, or the Alzheimer’s Association, https://act.alz.org/site/Donation2?df_id=32112&32112.donation=form1&_ga=2.134869301.599344199.1611933693-1251675104.1611778561.

Charliene High Hooker, 76, of Houston, TX, died Wednesday, January 20, 2021, due to COVID-19 after declining for many years related to Alzheimer&#8217;s Disease. Charliene was predeceased by her parents, Jerald and Lucille High, and her brother... View Obituary & Service Information

The family of Charliene H. Hooker created this Life Tributes page to make it easy to share your memories.

Send flowers to the Hooker family.