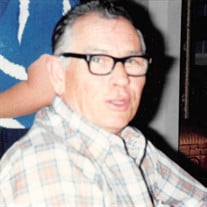 Oldest son of Frank Anderson Jordan of Rockwall, TX and Emma Pearl Moore of St. Joseph, MO, who both proceeded him in death. He was also proceeded in death by his brother, Donald Jordan, and sisters, Lois Lamb, Donna Jordan, and Hester Jordan. His surviving siblings are George Jordan of Winnsboro, TX, Lorraine Clouse of Ogalala, NE, Helen Real of Boulder, CO, and Vivian Roberts of Sacramento, CA. He was the proud father to 3 daughters, Beverly Smith of League City, TX, Rebecca Gosh of Rockwall, TX and Rhonda Baird of Rockwall, TX. He had 5 grandchildren, Amanda Cavazos of League City, TX, Blake Niederhofer of Magnolia, TX, Matt Gosh of Temple, TX, Jessica Gosh of Rockwall, TX and Brooke-lyn Baird of Lakeland, FL. He had 5 great grandchildren, Dylan Dresen, Rhett Gosh, Christian Cavazos, Charles Gosh, and Hattie Gosh. He served aboard the USS Bountiful in WWII and was a proud Navy sailor. He was at 5 major invasions and was a first responder at Pearl Harbor after the attack in 1941. He was also the last remaining Iwo Jima Survivor in the State of Texas. He was very humble about his participation in the service. Charles was a truck driver supplying chemicals of various types to the USA and Canada. He was awarded for driving 3,000,000 miles without a wreck or ticket. He also was honored for rescuing a fellow driver from a burning chemical truck after the truck flipped as it ran off the road, into a cornfield and burst into flames. He loved to travel and during his retirement, he and his wife completed 25+ cruises in various locations worldwide. He also enjoyed the occasional casino trip. Military Reunions, or domino game (and he won most of them!) He also was the caretaker for his wife, of 65 years, until her death in 2020. Charles was a proud member of the Arabia Shrine, Scottish Rite, and Masonic Lodge No 1295. He was active in working for the Shriner’s Hospitals and Scottish Rite Hospital for Children. He was also a lifetime member of the Veterans of Foreign Wars Post 490 and American Legion Post 7109. He was a wonderful father, an excellent provider to his family, a loving husband, and playful grandfather. He was always happiest when seeing his family and friends doing well. He was kind, humble, and always ready to help at a moments notice. We Love Him. If you can't join the family for this service please join them via live stream through this link: http://webcast.funeralvue.com/events/viewer/65698/hash:217E4B8B0B903443

Oldest son of Frank Anderson Jordan of Rockwall, TX and Emma Pearl Moore of St. Joseph, MO, who both proceeded him in death. He was also proceeded in death by his brother, Donald Jordan, and sisters, Lois Lamb, Donna Jordan, and Hester Jordan.... View Obituary & Service Information

The family of Charles Earl Gamble created this Life Tributes page to make it easy to share your memories.

Send flowers to the Gamble family.