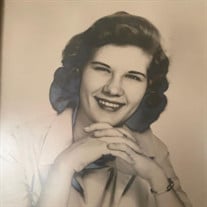 Carolyn Hart Gibson of Pearland passed away peacefully on Saturday, June 5, 2021. She was born in Goose Creek (Baytown) Texas on September 25, 1937 to Dennison Hart.and Tonie Esterak Hart. (both deceased). Carolyn was the “middle child” –the Hart siblings were Wayne Thomas Hart (passed in 2020), then Carolyn, then the youngest is Lanell Hart Fletcher. The three children were each just a year apart, so they grew up close and stayed close throughout their lives. Even though Carolyn was the “middle” she was sure to never be overlooked! She had an incredible zest for life and a presence. And even from a young age she had a nurturing nature. Carolyn was a resident of Pearland since 1962, and a school bus driver (Bus #12) for decades in Pearland. Generations of children remember “Miz Gibson” and her smiling face, gentle mothering – and fun! Her colleagues and friends remember her humor and her loving nature. She was a stylish dresser with floral accessories and ribbons, and ALWAYS smiling. She kept her home and surroundings decorated and cheerful at all times. She was a ray of sunshine and light! Carolyn and her husband Billy Ray Gibson were young and energetic parents as they raised their four children, Robert Wayne Sherrouse, Melvin Wade Sherrouse , Clifton Morris Gibson and Phyllis Alline Gibson. Billy and Carolyn were youth leaders at the Pearland First United Methodist Church when they themselves were not much older than the youth. Their four children saw the love of God and the love for others modeled at a young age. Once the children were older, Carolyn and Billy camped and or took road trips all over the United States with close friends. Lots of stories! Lots of adventures! Mischief and joy was a way of life! For example, everyone who ever saw Carolyn at a baseball game – whether little league or major league baseball - enjoyed and caught her enthusiasm. And, of course, she wore customized and “blinged out” sun visors- her own creations! For a while she worked at the Astrodome in the nursery for the Astro baseball players’ children. She nurtured those children, and especially the young moms who were isolated by fame and distance from their families. Granny Gibson was a blessing to all! Carolyn was a doting “Granny” for her family and was always vibrant and ready for adventure! Even in her later years, Carolyn was always ready to GO! Limitations walking? No problem. Load up that scooter in her car and watch her go! She wore a tiara for her 81st birthday and “did Vegas”. She was a true celebrity on the Vegas strip! Everyone smiled and welcomed her! What a delightful and infectious spirit she had! Carolyn was preceded in death by Billy Ray Gibson, her husband of 58 years, and her older brother Wayne Thomas Hart. She is survived by her sister Lanell Hart Fletcher; childen; Robert Sherrouse and wife Chung Sherrouse , Melvin Sherrouse and wife Susan Sherrouse, Clifton Gibson and wife Marty Gibson, and Phyllis Gibson. Grandchildren are Vicky Harp and husband Dan Harp, Joel Sherrouse, Brett Gibson and wife Dr. Amber Gibson, Lydia Marler and husband Tanner Marler, Andrew Gibson, Nathan Gibson, Christian Alm-Gibson and Hannah Alm Gibson; great grandchildren Elliot Harp, Hadlee and Jacob Marler and Harvey Gibson, as well as a large extended family and many loving friends.

The family of Carolyn Hart Gibson created this Life Tributes page to make it easy to share your memories.

Carolyn Hart Gibson of Pearland passed away peacefully on Saturday,...

Send flowers to the Gibson family.