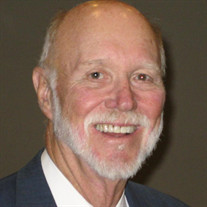 Carl Lynn Ray, 86, of New Braunfels, Texas, passed away on March 9, 2021 after a long and happy life. The funeral service will be held at 2pm on March 17,2021 at South Park Funeral Home in Pearland, Texas. Visitation will be held at the same location at 1:00pm before the service. Burial will follow the funeral at the South Park Funeral Home and Cemetery. Carl was born in Corpus Christi, Texas on June 27,1934. He graduated from Stephen F. Austin High School in Houston, TX in 1953, where he was well-known as the superstar of football. He received a football scholarship to University of Houston for a time, then joined the U. S. Army in 1954 for a brief stay. Carl continued his education at University of Houston and received his Bachelor of Science degree in 1961, then completed his law degree from the University of Houston graduating with Doctor of Jurisprudence in 1963 number one in his class. He was a member of Delta Theta Phi Law Fraternity. Carl worked his way through school as a landman at Kirby Petroleum to support his family. Following graduation from law school, he worked a short time for Fulbright & Jaworski law firm in Houston, before going into private practice. He specialized in civil trial work such as personal injury, some legal and medical malpractice on both sides of the docket. He practiced law in Houston for 36 years, and continued practicing after moving to Port O’Connor to be honored by the State Bar of Texas in 2013 for more than Fifty Years of meritorious service. Carl enjoyed fishing, hunting and being with family and friends. He was actively involved with CCA, and helped begin the Port O’Connor Chapter of CCA where he served as President and Banquet chairman for several years. Carl was on the CCA Texas Executive Board and a member of the committee for CCA Texas Parks and Wildlife. Carl often volunteered his time as well as legal services to others in both Houston and Port O’Connor. Carl Ray was married to Pamela Purtle Ray on November 26, 1976: they were married 44 years. Carl is survived by his wife, Pamela Ray, children Carl Randall Ray and wife Lynne Ray of Houston, daughters Leslie Griffith of Ajijic, Mexico and Trenton Ray DeSpain of Marble Falls, TX; grandchildren Trenton Foster and husband Sean; Carly Landwehr and husband Noah, Bobby Kent McEntire III, Samantha Kuykendall and husband Kurtis, and Miranda Wheeldon and husband Ian. Great grandchildren Henry James, Maxwell Foster, Atticus Landwehr, Huck Landwehr and Emerson Skye McEntire, as well as many other family members whom he loved. Carl was preceded in death by his father Carl A. Ray, his mother Adele Stover, his grandson Cooper Ray DeSpain, and his in-laws Ray Robert and Mevolyn Purtle. Pallbearers are Trey McEntire, Kurtis Kuykendal, Ian Wheeldon, Marcus Purtle, Danny Elkins, Larry Meachem. In Lieu of flowers, memorial donations may be given to, Elara Caring Hospice, New Braunfels, 300 Landa Street, New Braunfels, TX 78130-5308, phone 830-643-1971, The family of Carl L. Ray wishes to thank hospice for all of the care and love they have provided. If you are unable to join us for the service please follow the link provided: http://webcast.funeralvue.com/events/viewer/50044

Carl Lynn Ray, 86, of New Braunfels, Texas, passed away on March 9, 2021 after a long and happy life. The funeral service will be held at 2pm on March 17,2021 at South Park Funeral Home in Pearland, Texas. Visitation will be held at the... View Obituary & Service Information

The family of Carl Lynn Ray created this Life Tributes page to make it easy to share your memories.

Send flowers to the Ray family.