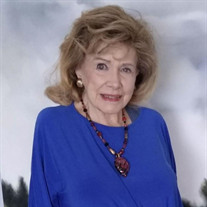 Beverly Repkie, 87, went to be with Jesus on March 8, 2022. Beverly was a beloved daughter, wife, mother, grandmother, sister, aunt and friend. She was born in Rahway, New Jersey to Marguerite and Fred Ritter. After graduating from Rahway High School, she graduated from Washington Secretarial School in Newark. Beverly’s time in secretarial school proved to be life changing in more than one way, for it was on her daily commute on the train that she met the man who would become her husband, Charles Repkie. Beverly and Charles married on April 29, 1956 and enjoyed a life in Westfield, New Jersey before moving to Houston in 1961. They lived in Houston until they moved in 1976 to the horse farm they loved in Tomball. After Charles went to his heavenly home in January of 1987, Beverly remained in Tomball until 1992 and lived the rest of her life in Houston. Beverly’s career included a position as a secretary at RCA in Woodbridge, New Jersey, an independent designer in Houston, president of an interior commercial construction company, The Builders of Texas, in Houston and Designer/General Manager with the McNair Group. While she enjoyed an interesting and illustrious career, her true impact was made on the many people whose lives she touched. She loved people, took a genuine interest in everyone she met and made them feel more valuable because of their time spent with her. She had a calming presence and a spirit that delighted in the little things that brought her closer to God. She loved reading her devotionals and cherished her Beverly loved her family and also considered her very wide circle of friends to be family as well. The biggest piece of her heart belonged to her grandson, Jackson, whose time with her she treasured from the moment he was born. She is survived by her daughter, Pamela Repkie Winder and her chosen son, son in law, Mark Winder; her grandson, Jackson Winder; her sisters Norma Rupp (Hank) and Margaret Petty (Stephen); nieces, nephews, great nieces and great nephews and a multitude of friends who were family. She is reunited in Heaven with her husband and parents. Celebration of Life: 10:30 AM, Friday, April 1, 2022 at John Wesley United Methodist Church, 5830 Bermuda Dunes Dr., Houston, TX 77069, and reception to follow right after services. To access the livestream of the service, please go to the Livestream tab at https://www.jwumc.org. In lieu of flowers, donations may be made to The Brookwood Community at www.brookwoodcommunity.org/donate or mailed to The Brookwood Community, 1752 FM 1489, Brookshire, TX 77423.

Beverly Repkie, 87, went to be with Jesus on March 8, 2022. Beverly was a beloved daughter, wife, mother, grandmother, sister, aunt and friend. She was born in Rahway, New Jersey to Marguerite and Fred Ritter. After graduating from Rahway High... View Obituary & Service Information

The family of Beverly Repkie created this Life Tributes page to make it easy to share your memories.

Send flowers to the Repkie family.