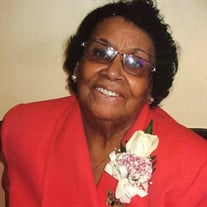 Betty Perkins Finney was born December 12, 1926 in Indianapolis, Indiana. She was the ninth of 13 children born to Edward Lee and Bessie Hudson Perkins. Betty was preceded in death by her loving husband, Bishop Richard LaFayette Finney, Sr.; sons, Dickey and Richard Finney, Jr.; grandson, Richard Finney III; sisters, Mae Thelma Perkins, Dorothy Perkins Simmons, Marian Perkins Franklin, and Marjorie Perkins Robertson; and brothers, Nicholas, Peter Edwin, David, Robert, Carl, and Frederick Perkins. She is survived by her younger sister, Jaquelyn Starks of Indianapolis, Indiana; grandchildren, DeAndre Finney, Trenice Finney Rasmus, Gabrielle Finney, Danielle Finney, Char’Dette Young, Jamond Young; daughters-in-Christ, Billie Tate, Amantha “Tisha” Brown; and a host of nieces and nephews. All who remain rejoice that Mother Betty Finney is now present with the Lord Jesus! In 1947 Betty reunited with her grade school friend, Richard Finney. They became inseparable and married October 25, 1947. The first son to this union, “Dickey” died in infancy. In 1965 Richard and Betty moved to Baytown, Texas where Dr. Finney pastored Thompson Chapel CME Church. A year later he was moved to Metropolitan CME Church, Houston, Texas. It was in Texas that their second son, Richard Jr. came into their life. Standing for the Word of God and against the traditions of men, by faith, on December 7, 1973 they founded Grace Congregational Church, Houston, Texas. Betty served in many areas of ministry and remained a faithful member of Grace Church under the leadership of Pastor Walter Turner, Jr. until her departure from this earthly realm March 23, 2021. Mother Finney loved caring for others; she did just that during her more than 30-year nursing career. Shifting gears, she gave herself solely to the work of the Church. Her heart was for the children – nursery worker, children’s choir pianist, church school teacher. She crocheted a “personal blanket” for every child born in the congregation for over 20 years. She taught her signature song “It’s A’ Bubbling” to four generations of children in the Grace Children’s Choir. Mother enjoyed crocheting, playing scrabble, listening to hymns, and reading Scripture. (Psalms 27 and 1 were her favorite.) How she loved considering and discussing “the Rapture”! She is tremendously loved and will be missed by all who knew her. Our family wishes to thank you for your support, words of encouragement and acts of kindness. We pray you see the testimony of her life as we were blessed to see.

The family of Betty Perkins Finney created this Life Tributes page to make it easy to share your memories.

Send flowers to the Finney family.