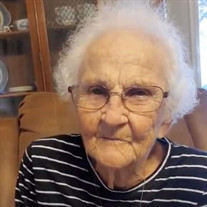 Bessie Jane French Sunrise - January 1, 1931, Sunset - January 31, 2022 She was born in Matagorda County, Texas., Bessie grew up in Bay City, TX. Bessie met Robert French when she was working at the Walgreens Deli counter as a waitress. They started talking and ran across each other several times until Robert re-enlisted in the Army. They corresponded for about 2 years and he surprised her when he returned from his discharge from the service. They were married in Bay City, Texas at First Baptist Church on October 6, 1951. They celebrated their honeymoon at the Bay City Rice Festival street dance. They lived in Bay City until Robert got a job with his brother at the Stone Company in Houston. They were married for 66 years. They had a son Johnny in 1952 and a daughter Beverly in 1953. She spent her career as a secretary in several different companies. As her children got older, they enjoyed hunting and in 1963 they moved to Pearland on 5 acres and raised cattle and horses. In 1983 they purchased 50 acres in Normangee TX for hunting and raising cattle. Bessie and Robert moved to Normangee to retire. Bessie enjoyed spending time in the kitchen baking and cooking. She enjoyed spending time with her grandchildren and great-grandchildren. She enjoyed sitting on her porch in the country watching the deer and hummingbirds. Bessie was an extremely thoughtful and caring woman. She was also one of the strongest and toughest women around. Survived by Son: Johnny French and wife Darlene,Son-in-law: Kenny Sims, Sisters: Kathy Harding, Betty Hall, Brothers: Eddie Brinkley, Aubrey Brinkley, Granddaughters: Kelly and Anthony Stricklin, Casey and Kevin DeBord, Kristi Sims and Mark Garcia. Grandsons: Kirk and Sarah French Dale and Alexandra Simoglou, 15 Great Grandchildren, 1 Great-great Grandchild. Preceded in death by: Husband: Robert French, Daughter: Beverly Sims, Grandson: John Robert French, Great Grandchildren: Cheyenne and Cole French, Brothers: Robert Brinkley, John Brinkley, Wayne Brinkley, James Brinkley, Sister: Martha Hendrickson, Father: Robert Sylvester Brinkley, and Mother: Vevie Sidy McIntosh Brinkley.

Bessie Jane French Sunrise - January 1, 1931, Sunset - January 31, 2022 She was born in Matagorda County, Texas., Bessie grew up in Bay City, TX. Bessie met Robert French when she was working at the Walgreens Deli counter as a waitress. They... View Obituary & Service Information

The family of Bessie Jane French created this Life Tributes page to make it easy to share your memories.

Send flowers to the French family.