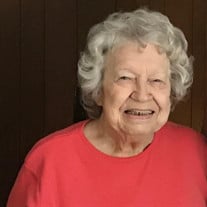 Bessie Gale (Brown) Childs, 82, known to her adoring family as Mom, Memaw, Little Memaw, and to many others as Gale, passed into the hands of her lord and savior on Thursday April 7, 2022. Waiting patiently for her arrival was the love of her life, Leon, who welcomed her home with open arms and a big, bright smile. Bessie Gale was born on May 4,1939 to Marion Leonard Brown and Ruby Ray (Hopkins) Brown in Waco, Texas. She was the second oldest of their six children. Bessie was named after her Aunt Bessie (Brown) Pearson whom she spent many enjoyable days with while growing up in Waco. She grew up attending the Central Christian Church in Waco, Texas. Bessie was a business woman who had owned a frame shop in Pearland, Texas, then went to work as a full charge bookkeeper for many years. Bessie met her soulmate and the love of her life, Leon Alexander Childs in 1955 while working at the Melrose Movie Theater in Waco. The two were engaged during that year’s Christmas season and then they were married in Houston on August 11, 1956. Their love resulted in the birth of 4 children, Leon Alexander Jr. (1958), Clifton Gleese (1959), Vanessa Gale (1962), and Stacey Wade (1965). After Bessie married Leon in August of ‘56, they moved to California where she completed her senior year of High School. During her senior year, Bessie had received a phone call at school from the FBI recruiting her to come work with them after graduation. Gale always talked about how exciting this opportunity would have been, but she was ready to start her family. During Leon and Bessie’s early years together, money was tight. On numerous occasions, Gale would pawn her wedding rings to purchase beans, milk, and bread for their family to eat that week. On Friday, after Leon would get paid, he would go to the pawn shop and buy her rings back. Gale and Leon both used grit and perseverance to overcome hardships. It was in those hard times that made them both stronger. Family was the center of Gale’s universe. She lived each moment for her family. Bessie’s Grandchildren and Great Grandchildren were ‘the icing on the cake’ for her, each a blessing from God. Gale had a unique and special way of providing both comfort and advice to anyone in need. She could see the beauty of life even in the darkest of times. Bessie was always there to lend a helping hand, no matter the distance. Bessie Gale Childs was a selfless, hardworking, and loving woman who will be greatly missed. Bessie Gale was preceded in death by her beloved husband Leon Alexander, her parents, her younger sister Ginger Simmons, her older brother Glenn, and her younger brothers Gary, Ray, Johnnie. Bessie Gale is survived by her son Leon Childs Jr of Friendswood, son Clifton Childs of San Antonio, daughter Vanessa (Craig) Hardegree of Midlothian, and son Stacey (Amy) Childs of Alvin. Along with 8 Grandchildren, Tiffany (Blake) Wellman of Midlothian, Erica (TJ) Syverson of Midlothian, Stacey II (Tarah) Childs of Mont Belvieu, Crystal (Martin) Silvestre of Dickinson, Chance Childs of Mont Belvieu, Keeleigh Childs of Pearland, Rachael Hardegree of Midlothian, and Mikayla Childs of Alvin. And 11 Great Grandchildren, Caleigh (11), Olivia (10), Carter (9), Kase (7), River (6), Kash (3), Eleanore (3), Charlotte (2), Josslynn (22 months), Presleigh (1) and Addilynn (10 months). Along with many nieces and nephews. We will miss the love, smiles, wisdom and laughter from our Mom and Memaw. We look forward to the day that we will all be together again. http://webcast.funeralvue.com/events/viewer/72198/hash:042177FFC14E9906

Bessie Gale (Brown) Childs, 82, known to her adoring family as Mom, Memaw, Little Memaw, and to many others as Gale, passed into the hands of her lord and savior on Thursday April 7, 2022. Waiting patiently for her arrival was the love of her... View Obituary & Service Information

The family of Bessie Gale Childs created this Life Tributes page to make it easy to share your memories.

Bessie Gale (Brown) Childs, 82, known to her adoring family as...

Send flowers to the Childs family.