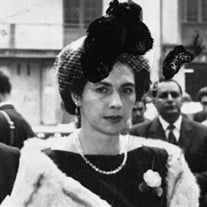 Aura Maria Alejo Traslaviña, 96, passed away on June 7, 2022, at her home in Austin, Texas. She was born on November 24, 1925, in Cundinamarca, Colombia, South America, the daughter of Belisario Alejo Romero and Maria Oliva Lara Vargas. During the 1920's she was raised on her family farm (Ojos de Agua), along with her siblings, mother and father, and hundreds of farm workers. During the 1930’s, based on accounts from her schoolteacher and family, she exhibited a gift of poetry, writing, and reciting beautiful and original poems. During the 1940’s, she moved to Bogota, where she met and married Guillermo Aldana and together they had 2 boys; her husband passed away shortly after the birth of her second child. During the 1950’s she worked as an executive secretary for the National Rail Roads where she was introduced to her future husband, Jose Traslaviña, and together they had 5 children. In the 1960’s she worked as a nurse in Colombia caring for wounded soldiers. She immigrated to the United States from Colombia in 1968 in search of a better life for her children. As she started her new life in Lindenhurst, New York, with few resources and not knowing English, she was able to find work at Grumman and Shidel making airplane parts and parts for the NASA Space Shuttle. While being away from her children was difficult for her, she was motivated to work hard and save money to petition each of her children. After 7+ years, she was able to bring her children to the United States. Raising her children in New York during the 1970’s as a single mother was not easy, but she made sure her children had everything they needed. In 1978, she visited her beloved nephew in Houston, Texas, and decided to move the family to Houston a year later. During the 1980’s she found work at NASA/Johnson Space Center and Grumman. When her work at Grumman completed, she went back to school and trained to become a manicurist. After getting her certification, she worked in the Galleria until she retired in the early 90’s. During her retirement years, she reconciled with her husband, and they lived together until his death in 2008. During 2010, she spent time with her children and grandchildren in Houston and Austin, Texas. For the last 4 years, she lived with her daughter in Austin, Texas, where she enjoyed the love and care of her daughter and family. She was surrounded by her family and nurse as she departed to spend eternity with God. In addition to her parents, she is predeceased by her husband, Jose Antonio Traslaviña, sons Orlando and Gustavo, sister Brenda, and brother Nestor. She is survived by her children Jose Luis, Carlos Alberto and wife Dominga, Libia Ines Petkovich, Maria Victoria Hines, and Juan Manuel and wife Rosalyn; fourteen grandchildren - Monica, Oscar, Sonia, Joselo, Libero, Cassidy, Jennifer, John Carlos, Jonathan, Jacob, Izabelle, Olivia, Gabriel and Matthew and ten great-grandchildren - Fabian, Valentina, Maria, Martin, Emilio, Maya, Collin, Nico, Lorenzo and Milah. She is also survived by her sisters Dora and Gladys and brother Humberto, and many nieces and nephews. If you cannot join us at the funeral home for the service, you can join us online by clicking on the following link;http://webcast.funeralvue.com/events/viewer/74763/hash:C9738361A688664D

Aura Maria Alejo Traslaviña, 96, passed away on June 7, 2022, at her home in Austin, Texas. She was born on November 24, 1925, in Cundinamarca, Colombia, South America, the daughter of Belisario Alejo Romero and Maria Oliva Lara Vargas. During... View Obituary & Service Information

The family of Aura Maria Traslavina created this Life Tributes page to make it easy to share your memories.

Send flowers to the Traslavina family.