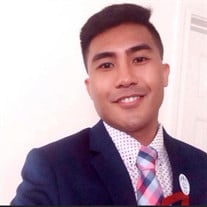 Anthony Amiel Jezz Gonzalez Avillanoza “Coach Tony”, 39 years of age, of Houston, TX passed away on Wednesday, April 21, 2021 from Acute Respiratory Distress Syndrome after over a month long battle. Coach Tony was born in Quezon City, Philippines on October 9, 1981. He was always a stellar student, an avid reader, and even found time for more than just academics. He graduated elementary school as the valedictorian. Later on in high school he was a top debater, a tennis champion, and graduated with cum laude honors from Pearland High School. His athletic achievements did not stop in primary and secondary school, he later became the student director of sports at Baylor University, wherein he received his Bachelor of Science in biochemistry. During his collegiate years, he was employed as a Waco Jr.’s volleyball club coach, as well as a volunteer coach for the Baylor women’s volleyball team. After he returned to his hometown of Houston, Coach Tony also found his calling as a team captain for the Church of Christ Houston men’s volleyball team and also the coach for the women’s volleyball team, wherein he led them to win seven consecutive years. It was there he made the time to patiently teach individuals of all skill levels, leading them to years of victories, but moreover, love of the brotherhood. Coach Tony was not only known as the volleyball guru in his church community, but also at Willowbrook Volleyball Club where he quickly found another home. He often spoke highly of his teams, colleagues, and the relationships built at Willowbrook. Furthermore, Coach Tony was always so proud to be behind such a talented group of young individuals, some of which he led all the way to nationals. It is with deep sorrow and grief that Anthony’s loved ones must say goodbye to him. Everyone who knew him admired his optimism, kindness, perseverance, and ability to remain calm and composed even in the most unfavorable moments. In these times, his family requests nothing more than to remember him for the way he made everyone around him feel- uplifted, inspired, and triumphant in every fight. Tony was super loving, generous and a truly responsible son to his mother Amparo and a wonderful nephew to his Aunt Gloria Cuyugan. He was loved and cared for by his elder brother Arnold Joy, Sister Allen Jade, and brother in law Juanito. He was honestly adored by his nephews Jerome, John, Jei Ahr, and Andre Jay and by his nieces Kristine and Jeaneen. He was loved by his cousins, Aunts, and Uncles of the Avillanoza and Gonzales Clans. Preceded in Death of his Father Jesus D. Avillanoza in 2004, Anthony Amiel Jezz Gonzalez Avillanoza “Coach Tony” is forever a champion. To access LIVESTREAM, please click link below: http://webcast.funeralvue.com/events/viewer/53276/hash:AEE246414DC8C5BB

The family of Anthony Amiel Jezz Gonzales Avillanoza created this Life Tributes page to make it easy to share your memories.