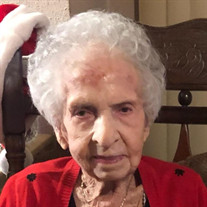 Anna Bell Savely Newell was 18 days shy of her 101st birthday when she left this world on June 4th to be with our Savior and loved ones. Born June 22, 1920 in Cushing, Oklahoma, to Clarence and Sarah Savely, Ann was one of 9 children. The middle child of 5 girls and 4 boys, Ann was the confidant of the Savely clan; she was the one that all the kids would go to for advice or to help them out of a jam. Ann and her family remained close all their lives. She was the last of her siblings to leave this world, so lots of people have been waiting for her to celebrate on the other side! In January 1941, Ann married Daniel Adran Newell. Ann and Dan had their first son, Byran Lee (aka Guy) in January, 1942. They adopted Kathy in March, 1953, and Ann gave birth to Paul in September of the same year. She always said it was like having twins. A devout member of The Church of Jesus Christ of Latter-Day Saints (LDS), Ann worked tirelessly in the Relief Society, Nursery and Sunday School positions and accepted all her “callings” with excitement and boundless energy. Ann was a true servant of the Lord. Ann was always there to help, offer encouragement and support to those in need - especially her family, neighbors and friends. She worked in the community helping people apply for services as well as in her church with the youth groups. It was nothing to have a large group of teenagers from church over at her house to hang out, play the piano, sing and eat food. Known as “Millie” in the Broadway ward back in the mid 60’s to early 70’s, everyone loved going to Millie’s home! A hard worker, Ann worked at Tinker Field in Oklahoma during WWII, doing her part for the war efforts as a Riveter Gal! A savvy businesswoman, Ann and Dan operated 3 convenience /grocery stores over the years. When she wasn’t working, Ann’s hobbies included arts & crafts, sewing clothes for others, making wreaths for holidays, going to flea markets and spending time with friends. Ann leaves behind her 3 children and their spouses: Guy & Emily Newell, Paul & Traci Newell and Kathy & Richard Perry. Ann’s 11 Grandchildren and Spouses: Ann & Waru Ngatai; Paul K. Newell; Byran Newell; Kayley & Eric King; Paula & John Logan; Danny & Michelle Newell; Richard Ray Perry & Paige Chadwick; Kyle Perry; Kandi Perry & Joe Nimon; Cade Watson, Savanna Watson. Ann’s 13 Great-grandchildren: Jordan, Austin, Brandon and Katie Ngatai; Carlee McLelland; Hayden Logan; Alex and Rachel Newell; Fox and Spencer Newell; Aldrich ‘Al’, Justin and Aarica King.

Anna Bell Savely Newell was 18 days shy of her 101st birthday when she left this world on June 4th to be with our Savior and loved ones. Born June 22, 1920 in Cushing, Oklahoma, to Clarence and Sarah Savely, Ann was one of 9 children. The... View Obituary & Service Information

The family of Anna Bell Savely Newell created this Life Tributes page to make it easy to share your memories.

Send flowers to the Newell family.