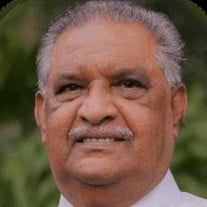 A.K. George was lovingly referred to as Georgeachayan, Georgekutty, Mammen, Papa, and Appacha. He was born on March 21st, 1940 to Ancheril and Annamma Koruth, as a part of the Ancheril Family in Anaprampal, Edathua, Kerala, India. Georgekutty was the youngest son, and the last remaining sibling of three girls and two boys. Georgekutty is survived by his wife, Kunjamma, children, Anil and Anu, son-in-law Suresh, daughter-in-law Solly, and his four grandchildren, Julia, Jeremy, Kathryn, and Angelica. In 1961, Georgekutty moved to Jabalpur and started working as a lab technician. In 1967, Georgekutty met Kunjamma (Poykayil House, Elanthoor) while she was working as a staff nurse and got married the same year. They had the blessing of getting married by the Most Rt. Rev. Mar Chrysostom Thirumeni. They were active members of the St. Andrews Mar Thoma Church and served at the Sihora Ashram assisting with mission work. In 1976, the family immigrated to Houston, where he worked as a Machinist and also became active members of the Mar Thoma Church. Georgekutty fulfilled his duty to God and served for many years as the trustee of Trinity Mar Thoma Church. He was a founding member and dedicated much of his time towards the growth of the church. Georgekutty played an instrumental role in building the church and assisted the Late Rt. Rev. Thomas Mar Athanasius Thirumeni by laying the foundation stone in 1982. Georgekutty’s greatest pride was his family. He liked traveling, family dinners and spending time with his grandchildren. Georgekutty’s favorite hobbies were soccer and volleyball, playing cards, and being a member of the Kerala Sports & Arts Committee. He was well-rounded in many skills, especially being a handyman, working on his cars, and ensured passing on that knowledge to his kids. He was well respected and known for his calm demure, while his humble smile and joyous laugh left a lasting impression. Our family expresses their heartfelt thanks for all the well wishes and supporting us through this difficult time of grieving. We ask that you continue to keep our family in your thoughts and prayers.

A.K. George was lovingly referred to as Georgeachayan, Georgekutty, Mammen, Papa, and Appacha. He was born on March 21st, 1940 to Ancheril and Annamma Koruth, as a part of the Ancheril Family in Anaprampal, Edathua, Kerala, India. Georgekutty... View Obituary & Service Information

The family of Ancheril Koruth George created this Life Tributes page to make it easy to share your memories.

Send flowers to the George family.