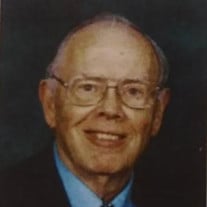 Alfred Phillip Stevens Jr., 94, of Tyler, Texas passed away on Saturday, October 24, 2020. He was born on May 13, 1926 in Houston, Texas to parents, Annetta Eufaula (Nunnie) and Alfred Stevens, Sr. Alfred was preceded in death by his loving wife of 70 years, Joyce (Rackley) Stevens; son Phillip Lynn Stevens and parents, Nunnie (Volger) Stevens, Alfred Phillip Stevens Sr. Left to cherish his memory are his children, Rodney Bruce Stevens, Debbie Joyce (Stevens) Majors; brother, Weldon Laverne Stevens; sister, Vernell Lucille (Stevens) Patterson; 6 grandchildren and 14 great grandchildren; as well as a host of other family members and friends. Al was proud to be a WWII Veteran and was very involved in local, state and national politics. He was always encouraging others to write their senator or congressman about different matters. He met Louis Gohmert in Washington DC when he went on the first Brookshires WWII Veteran flight to D.C. a few years ago. Gohmert told him that all his many petitions went right to the top of the stack when they arrived because they generally had 300 plus signatures and represented a huge population of East TX. Al and his siblings were raised in a two-story log house that they helped their Mom and Dad build. He was an entrepreneur from elementary school on up. He always found unique ways to make money, even during war time. As an adult he became a paper salesman and worked for five different companies all at the same time. He was the salesman of the year so many times, he told them to quit giving him plaques and trophies because he ran out of room for them. He still loved to travel and did so quite often with his daughter and son-in-law. He was always wanting to know, when is the next trip and where are we going now. In his later years he was very active in his church, Christian Temple, in Houston and then again when he moved to Tyler, next to his daughter, in 2003 where he attended Freedom Fellowship A/G. There will be a Memorial service Monday at 6pm in Tyler, Tx. on Nov 2, 2020 at Freedom Fellowship A/G and visitation following until 8pm. Funeral will be the following day in Pearland, Tx. The family will receive guests for a visitation on Tuesday, November 3, 2020 from 1:30 to 2:00 PM; the funeral service will be at 2:00 PM at SouthPark Funeral Home Chapel; with a burial to follow at SouthPark Cemetery, 1310 N. Main St., Pearland, Texas 77581. If you are unable to attend the service but would like to join via live steam, please use the following link: http://webcast.funeralvue.com/events/viewer/39338

Alfred Phillip Stevens Jr., 94, of Tyler, Texas passed away on Saturday, October 24, 2020. He was born on May 13, 1926 in Houston, Texas to parents, Annetta Eufaula (Nunnie) and Alfred Stevens, Sr. Alfred was preceded in death by his loving... View Obituary & Service Information

The family of Alfred Phillip Stevens created this Life Tributes page to make it easy to share your memories.

Alfred Phillip Stevens Jr., 94, of Tyler, Texas passed away on...

Send flowers to the Stevens family.