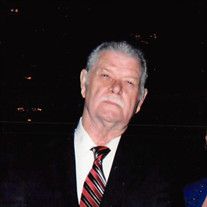 Alfred “Al” Dewitt Ferguson was born on December 15, 1943, and he went to join the Lord on December 6, 2021. He is preceded by his Father Orville Ferguson and his mother Edna Kirkland Ferguson, a brother Curtis Ferguson, a sister Marvelinne F. Lynchard, and his daughter Cheryl F. Barrios. He is survived by one brother, Orville Ferguson Jr., an eldest sister, Shelby F. Waid, and his youngest sister, Dianna F. Bradley. He is survived by his widow, Nancy Ferguson, a stepson, and two sons, David Hernandez Jr., Roy Wayne Ferguson, and Alfred Ferguson Jr. Al began working at a very young age, he grew up working on a farm with his father, and then moved on to learn the logging business. In his young adult years, Mr. Ferguson owned a ranch in Texas and tried his hand at ranching. After his first marriage, he began working in the oilfield business, where he founded Aim Wireline Controls Inc. after his second marriage until he retired from the oilfield at the age of 53. Three years later he started Aim Solar Screens, a well-known and successful business in Pearland, Texas, which turned into Aim Blinds and Shutters, later transitioning into A1 Services from which he retired in 2018. In between, Mr. Ferguson managed to enjoy his favorite things, horse racing, casino gambling, dancing with his beautiful wife, traveling, and shopping for antiques. He was a family man who would end his day with a good western movie, a cup of coffee and a cigarette. Mr. Ferguson was devoted to a lifetime of service to his family and work. He was a good son, father, uncle, husband, step-father, and grandfather. He leaves behind grandchildren and his beloved wife, Nancy, of 30 years. In lieu of flowers please consider donations in memory of Alfred "Al" Dewitt Ferguson to The American Heart Association, Dementia Society of America, or The St. Jude Foundation. If you can not join the family for the service please view the service online at this link. http://webcast.funeralvue.com/events/viewer/65644/hash:A2541B16BBE6B2AC

Alfred &#8220;Al&#8221; Dewitt Ferguson was born on December 15, 1943, and he went to join the Lord on December 6, 2021. He is preceded by his Father Orville Ferguson and his mother Edna Kirkland Ferguson, a brother Curtis Ferguson, a sister... View Obituary & Service Information

The family of Alfred Dewitt Ferguson created this Life Tributes page to make it easy to share your memories.

Send flowers to the Ferguson family.